How apt you have found work as an activist within the ABC. You speak of consequences but only selectively. A man chose to remain in detention (despite your omission of alternate options) after choosing to travel half way around the world to get on a boat to make an illegal entry into a sovereign nation to claim asylum based on the fact its what people do these days.

Well, not these days – at least not in Australia – but that is the point isn’t it. You deny the consequences of your activism. I ask you to answer the question: – in what small part is the detention of people a result of Green grooming of migrants.

The very fact you use this act of voluntary self immolation to further your activism is precisely why such an act is executed in the first place. People do not tend to self immolate if the me 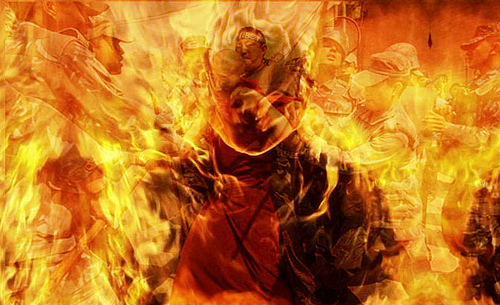 dia is not ready, willing and able to convert it into political capital.

Naturally, the Greens utilise this to further their own political capital. It is hard to fathom any other non Islamic political party in Australia doing so – mainly because it takes a certain mindset to encourage and reward.

Mr Green, when there are so many causes which require your attention, why not turn your attention to the greater good. Fight homelessness. Fight genuine oppression from the grass roots up.

These people flee an ideology which was present as the man read from the script of the victims playbook. You aid and abet it in your comments. The national broadcaster employees journalists who self censor and act as activists for this ideology.

The ideology may be at odds with many of your personal values, but if it helps you erode the values of the nation whose national broadcaster you represent, then it is safe to assume that for now you do not give a damn about the consequences.

And that is why I call you, the ABC, the soon to be drowned and immolated refugees, Australian of the Year – in the truest sense of what that term has become.

History, even recent history, has taught us that when we cave in to acts of terror, of self immolation, of self censorship and the like in the name of appeasing the perpetual victim – it opens the gate to more harm, more regression, more fringe claims to victim-hood and oppression.

It chills me to consider these are the consequences Mr Green and the ABC and the Greens and the Green flags are doing their best to peddle in the name of progress and liberty.

It’s on us: The real world consequences of our politics