As one who is under obligation to frequent one of the so-called “funky” inner-city suburbs in one of Australia’s major cities, a suburb popular with students, mediocre artists and criminals, I am in the priveleged position of being able to study the behaviour of some of the least useful people on the planet – the hippie – in their natural environment.

Whether it is the affluent, fully refurbished period homes with Greens slogans stuck to the letterbox; the cyclists who insist on riding down one of the busiest and most dangerous roads in Australia despite the existence of a dedicated bicycle track barely 100 metres away; or the obsession with drinking some of the best coffee in the world on dilapidated wooden boxes; working in the belly of the beast provides no end of curiosity.

As a dedicated conservative libertarian, I have no trouble with lucid, consenting adults choosing to live such a meaningless existence. However, as with the children of those raised in cults, who have never known anything else, I feel immense pity for their few offspring. This particular sub-branch of the species’ propensity to endanger their children’s lives via their rejection of modern medicine has already received adequate scorn. However, this is not the only manner in which they seem to undermine, perhaps subconsciously deliberately, their own reproductive chances.

I hope this meme makes my point clear. The fact that it is from a photo taken in another city shows that this disfunction is not limited to our own country.

I would implore you, won’t somebody please think of the children. 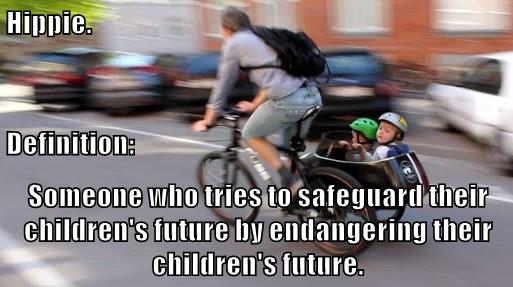