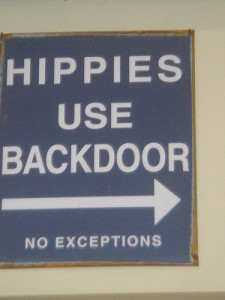 The word ‘discrimination’ has become a dirty word.

If you believe what is said in the media, to discriminate is to commit a grave and unforgivable sin for which there may be no redemption (at least in this life!). If you discriminate between different people, you may find yourself hauled before the Human Rights and Equal Opportunities Commission, or a judge.

But the reality is, we each discriminate, and we do it practically all the time.

“I think I’d like fish rather than steak tonight.”

“I prefer to buy Australian made products, rather than Chinese imports.”

I think the Greens are wonderful are are the best political party to run our government.”

That too is discrimination. But none of these acts of discrimination are likely to get you hauled up before a judge (at least not yet).

At a very basic level discrimination is simply recognising and understanding difference between one thing and another: the Liberal Party and the Greens are not the same, for instance. They have different policies and objects, and have come to their positions also through a process of discrimination.

In fact, it is often those who squeal loudest about discrimination who actually discriminate the most. We see this when supposed anti-discrimination activists demand different treatment for particular groups or individual within society. But this is, by definition, discrimination.

On the face of it, discrimination is neither a good thing nor a bad thing. We do it all the time as we evaluate options, determine our preferences and come to understand the world. Without discrimination, we could have no identity as we would be unable to differentiate our own self from another, nor could science or law exist. Certainly, some discrimination, particularly when it is arbitrary or pernicious, can be harmful. But most of the discrimination we make is either benign or good, and helps us to make positive choices in our lives.

Discrimination is not a dirty word!