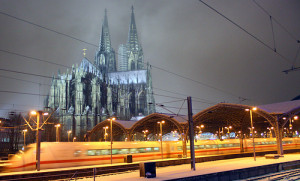 The week since the New Year has seen a scandal grow from bad to worse across Europe. It started in Cologne, Germany, but has since spread to German cities and into other cities in Europe. It concerns the groping, sexual assaults and rapes of hundreds of European women by thousands of muslim men on New Years Eve.

The obviousness of this fact is almost maddening, yet the response given by European officials, and the Mayor of Cologne, Henriette Reker, in particular, gives an insight into why this was allowed to occur in the first place.

Comments such as “There’s always the possibility of keeping a certain distance of more than an arm’s length — that is to say, to make sure yourself you don’t look to be too close to people who are not known to you and to whom you don’t have a trusting relationship,” and the suggestion of a “code of conduct” for women in Cologne, ie implying that it is women’s responsibility to avoid being raped, has confirmed what The XYZ, along with activists in both the West and the Middle East have been arguing for a very long time – that Western feminists and Western governments are prepared to push the rights of women under a bus in order to avoid offending islam.

These outrageously sexist comments, along with astonishing obfuscations to avoid acknowledging that the perpetrators were overwhelmingly of “North African or Arab descent,” a fact to which video footage and eyewitness accounts testify, earn Henriette Reker an XYZ Wally of the Week, named after everybody’s favourite Muslim apologist, Waleed Aly (TM). (Although technically the comments were made last week, the stupidity of the comments earned special carryover points.)

On a brighter note, the scale of the incident has meant that this has become, belatedly, too big for the world’s media to ignore. Importantly, Cologne did see several protests, by feminists, against both the alleged crimes by the men, and the attempt to ignore or obfuscate the reality of the situation by government officials.  In one, a naked performance artist stood in 4 degree celcius temperatures for about 20 minutes, holding a sign bearing the slogan “Respect us! We are no fair game, even when we are naked!!!” in the Cologne square where the attacks took place.  A couple of days earlier, the protest in the video below was carried out by clothed feminists.

There is still hope.