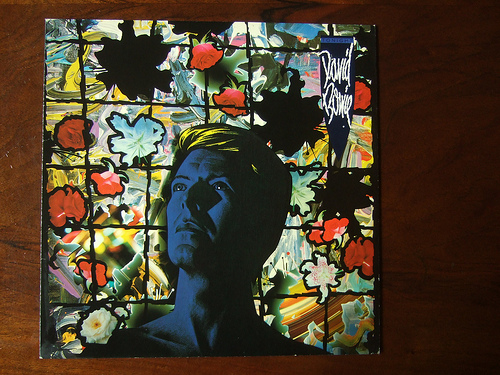 I feel so silly missing this when i first heard Lazarus, David Bowie’s single from his latest album, ‘Blackstar.’ Bowie says in the opening lines –

Look up here, I’m in heaven
I’ve got scars that can’t be seen
i’ve got drama, can’t be stolen
Everybody knows me now.

In the music video he is on his deathbed and looks more gaunt than normal. Tony Visconti, Bowie’s producer, said that Blackstar was Bowie’s parting gift. “His death was no different from his life – a work of art.”

And if anyone in history can make their death as an artistic gift to the world it was the man who fell to earth!

Bowie had been battling cancer for 18 months. Yet in that time he has released two albums (‘The Next Day’ and ‘Blackstar’), he had a huge exhibition in Melbourne (that I had to be ushered out of for going over the time limit… i still didn’t get to see everything), a BBC documentary, and I’m sure much more that has missed my attention.

His send off is classic Bowie, like a tiger knowing its end is near it can draw reserves for one last burst of pure power; like a dying star swelling to an enormous size before it goes out for good. This is where i think the title ‘Blackstar’, stylised as a black ‘☆’, came from.)

Bowie was a creative mastermind, dare i say the king of bringing imagination into reality (or just maybe goblins) and his like will never be seen again, not to the magnitude that was David Bowie. The entertainment industry is too safe these days, it would take a very special individual to emerge from the barriers of pop and shake up the way people see and think.

Listen to his catalogue, buy an album and go on an aural adventure, see one of his films or recorded concerts, be engrossed in the magic he can bring. Even though his life has ended he is so timeless that Bowie will live forever and ever.

Rest In Peace Starman – thank you.

Lachlan Bryce is a Geelong based musician and writer