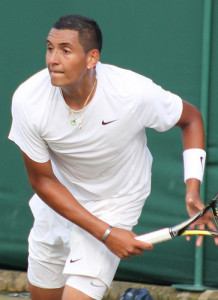 The XYZ had a lot of fun with Nick Kyrgios last year, especially during his delicious spat with Dawn Fraser, when everybody had to check the back of the PC Card Deck box to see which scored higher, the Race Card or the Gay Card. He has become known for his fiery temperament on and off the court, not unusual in the tennis world, and it must be said, not an obstacle to our taking him into our hearts.

During his magnificent win last night against world number 2 Andy Murray at the Hopman Cup in Perth, Kyrgios responded to a heckle from the crowd with one of the greatest (verbal) comebacks since Jesus said, “but he’s just taking a nap.” To quote the great man, (Kyrgios, not Jesus):

XYZ Quote of the Day, by the length of the straight. To Nick Kyrgios, we say well played. Well played indeed.