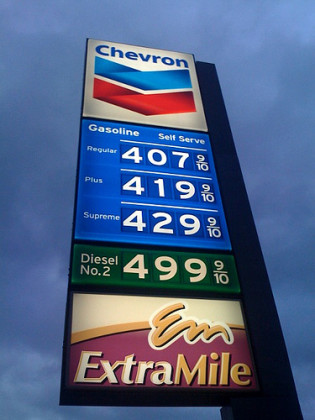 During the early 2000s, a doomsday prophecy emerged which was loosely connected to climate change (or as it was called then – ‘global warming’) known as ‘peak oil’.

Peak oil asserted that oil production had peaked at around 2000s, after which terminal decline would occur. We were told that demand for oil would rapidly outstrip supply, so it was crucial that we begin to adapt to this oil free future.

Peak oil was snapped up by inner city leftists and greenies who earnestly prophesied that the cost of a litre of petrol would exceed $5 before 2020. Universities and governments also joined the cause, sagely telling us that we needed to simplify our lives and cut our consumption – not just of fossil fueled transportation, but of all consumer products. Food production would also be threatened by peak oil, so population control was placed back on the table.
The belief was that ‘If civilisation is going to survive peak oil, it will need to be much smaller and simpler.‘

I was working in local government during the early 2000s, and like just about every other progressive cause, peak oil was firmly embraced. As was the case in many communities around the world, research and programs were commissioned and funded by my municipality, and staff and residents were evangelised. We were called to repent from our hubristic oily lives, to tread lightly on Gaia, and to offer her the sacrifices which were her due.

But then after the funds were spent, and increasingly stronger data was rolling in that weakened the foundations of the edifice of peak oil, the urgency to amend our lives began to wane, and peak oil slipped away quietly into the night, like Malthus, and Ehrlich’s Population Bomb before it.

However (much to the relief of those making their careers on this existential fear), new global ’emergencies’ came to the forefront, pushing the older ones aside, and ensuring that their predecessor would never be properly interrogated for the false alarm, nor that funds spent on a false pretense would be ever accounted for.

Crude oil is now edging down towards US$30 a barrel. Shale oil production has boomed and new technologies have been developed to extract hard to reach deposits. There is no shortage of oil in the world, and there won’t be anytime soon.

We could keep burning oil for fuel for decades without worrying about supply or increasing global demand. But we won’t need to. New and cleaner sources of energy are becoming economically viable and are now being adopted. In time, they will replace the fossil fuels which have enabled both the industrial and information revolutions.

As new opportunities and solutions continue to be found which address legitimate concerns of poverty, food shortages, and pollution – without unnecessary scare-mongering or appeal to Gaia-esque metaphysics based more on ideology than evidence, hopefully we can now dispense with these doomsday predictions once and for all.