Readers of XYZ may recall being briefed recently on that new, and more virulent, form of the political correctness virus now sweeping academ 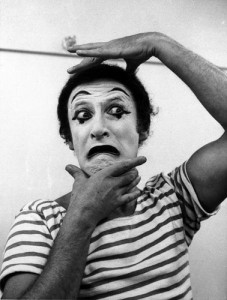 ia and rampaging through a campus near you. Micro-aggression it is called. In a sentence it means (and I paraphrase) pretty much anything and everything you say is misogynist, homophobic, transphobic, racist, Islamophobic, and / or just downright offensive to someone, somewhere – so shut the hell up, okay!

Even in their designated safe spaces, the students of today are not free from micro-aggression, since it doesn’t matter what the speaker intended, or even thought they were saying. If the hearer finds it racist, offensive, or humiliating, then it is.

We look forward to the announcement, which must now be imminent, that all speech, that is each and every vocalisation, has been banned, henceforth, at an academic institution somewhere in the western world. The new monasticism thus established will see students taking vows to protect each other’s dignity and to ensure no one can be possibly offended by anything they say, since no one will say anything at all. The late Marcel Marceau, the famous French mime artist, must be cursing the fact he is dead – he would have been a certainty for a high paying chancellorship somewhere in the Ivy League, once the scourge of micro-aggression had taken its full toll on the faculty and student body.

One can only assume that the logical next step will be even more terrible. For even the banning of speech, and the imposition of silence, will not eradicate that shifting gaze, that half smile, that hurtful body language. Surely only mass euthanasia can really bring an end to offence taking in our academic institutions.

Source: Derald Wing Sue and the subconscious offence that your words cause