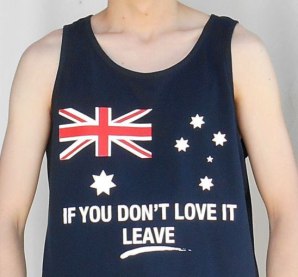 A Muslim leader in Sydney has today made blatantly racist comments during the course of Friday prayers at the Parramatta mosque attended by teenage terrorist Farhad Jabar.

Among the remarks made by Parramatta Mosque chairman Neil El-Kadomi during his address was, reportedly, the direct threat – “if you don’t like Australia, leave.” At the front of the mosque later he went further, telling the assembled media, “we do not need scumbags in the community.”

Only last year the ABC’s self appointed moral guardian, and chief Constable among the thought police, columnist Jonathan Green, was outraged at a supermarket chain selling singlets and t-shirts feauturing the infamously racist slogan now so freely and fearlessly adopted by, of all people, a mosque chairman (sic. we assume ‘chairperson’ is not required, but feel, in the interests of inclusiveness, the mosque should also adopt non-gendered language). Readers may wish to relive, and revel, in now-made-a-fool-of Jonathan Green’s commentary here (http://www.abc.net.au/news/2014-10-16/green-the-real-problem-with-love-it-or-leave/5817226).

Whilst such language would immediately have been denounced as divisive, offensive and racist, had it been used by anyone of Anglo-Saxon descent, we can only applaud Mr El-Kadomi for his delightfully racist tone.

If only more Islamic leaders were prepared to say something along the lines of “Australia love it or leave it” then we might be able to say it too without being shouted down as bigots.