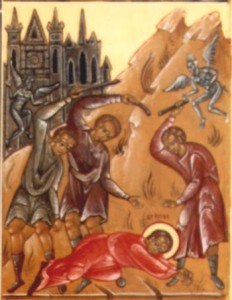 As the once great west continues its decline, gouged by politically correct zealots and self loathing socialists, so too does the once strong faith that nurtured its populace, that of Christianity.

News from Oregon today, of yet another shooting in the United States, indicates that Christian students were again specifically singled out and mercilessly murdered.

“Harper-Mercer, who has been named as the gunman, specifically targeted Christians during his rampage at the Roseburg college, the father of a wounded student claims. Anastasia Boylan’s father told CNN that the gunman entered her classroom firing, shooting her professor point blank. The students fell to the ground but as he reloaded, Harper-Mercer ordered them to stand up if they were Christians.”

The disturbing incident is one in a series of shootings with similarly deranged motives, in which people of Christian faith have been specifically targeted.

In other parts of the world, Islamic fanatics have systematically carried out such attacks – prominently, and most bloodily, across northern Iraq and Syria, in Kenya during the Garissa University atrocity, and elsewhere – the incidences are numerous. Clearly, it’s becoming increasingly dangerous to be a follower of Jesus of Nazareth. The portents are that this will only continue for western Christians, as the once strong church crumbles at the same time the rate of immigration (and the rate of fertility) among adherents of another faith rapidly increases.

The faithful should not be surprised, nor worse, doubt or abandon their faith. As the Galilean master himself told them:

“They will arrest you and persecute you… You will be betrayed even by parents and brothers, by relatives and friends; and they will put some of you to death” (from the Gospel according to St Luke 21).