There was a time when a man or woman in the uniform of his or her nation’s armed forces might be considered a hero, and treated as such. But that time seems to be passing rapidly in the suicidal west, as this sordid tale of one British hospital’s zeal to for not causing offence, real or perceived, demonstrates. 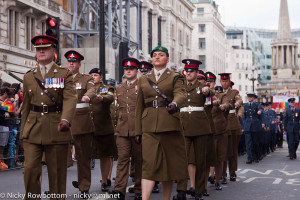 A British serviceman, in uniform, with painful chemical burns to his eyes, attended the hospital waiting room in Kent, and was asked to leave by staff anxious that he might “upset” others, because the hospital has “lots of different cultures coming in.”

One finds this perplexing on lots of levels. That the uniform of the Royal Air Force could be offensive and upsetting, even with commemorations of the 75th anniversary of the Battle of Britain fresh in mind. And what is it with “other cultures” anyway, surely the whole point of multiculturalism is that everyone is meant to be, or become, a Briton?

The Guardian, and the hospital concerned, are too polite to identify the easily offended “other cultures” they so feared upsetting. Perhaps readers can posit a suggestion – I’m at a loss!