There was a time when Green politicians turned their backs on visiting American Presidents. This rudeness was, apparently, a symbolic act, in opposition to American imperialism across the globe. It would be fair to say that most on the left of Australian politics normally find the United States a somewhat arrogant ally, and resent Australia being treating a bit like Uncle Sam’s deputy sheriff in the Asia-Pacific region. Conservative affirmations of support, even admiration, for America and Americans, have routinely attracted derision and cries of a cultural cringe, from those on the ‘progressive’ left. But not any more.

Former Prime Minster Julia Gillard started it with her tearful “Americans can do anything” speech in Washington a few years ago. It set a whole new standard for grovelling homage, but, of course, went largely uncritcised by the media, who would have absolutely crucified a conservative Australian politician giving such a speech. Now every down under Socialist wants to give the New York Times prophetic, if not messianic, status, as a political oracle, on the mater of asylum seekers. That the NYT criticises the policies of Australia on this point is, somehow, problematic and troubling for us. Why? Last time I checked Australia was still a sovereign nation, with the one world government, having its capital in Hobart, fantasised about by delusional Greens like Bob Brown still, mercifully, a thing of the dystopian future.

But the piece de resistance in all of this is surely the sole Green in Australia’s House of Representatives, Adam Bandt, who is now not only too willing to bend the knee before POTUS, but goes so far as to, metaphorically, assume the passive position also, producing memes such as that below lapping up the pompous proclamation of the current blowhard that unfortunately occupies the high status of POTUS. The spectacle of the Greens, gleefully and willingly accepting a lecture from the President of the United States on any matter is, not so much as to culturally cringe, but more to spontaneously combust in hypocrisy and extreme chutzpah. 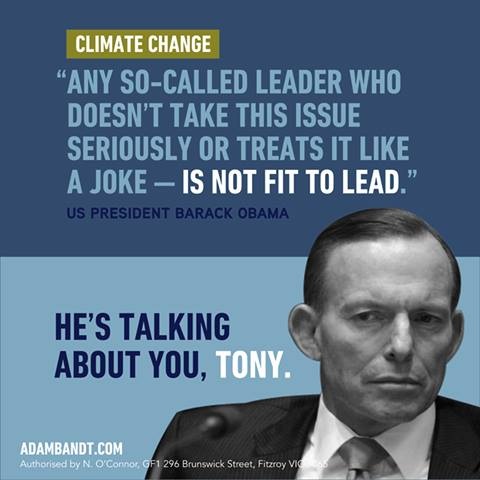