Watching The Bolt Report on Sunday mornings makes me very, very happy. I enjoy the cheeky, knowledgeable grin on Andrew Bolt’s face, a grin which says that he knows exactly what he is doing. (Disclaimer: I don’t know him from a bar of soap, so all of this is speculation.) He knows that he is presenting political commentary which is well informed but quite openly biased. He knows that everybody who watches his show can discern almost immediately on which side of the fence he sits, and make up their own minds. He knows that he is being just as biased to the right as the ABC is to the left, but he has no qualms admitting this bias. 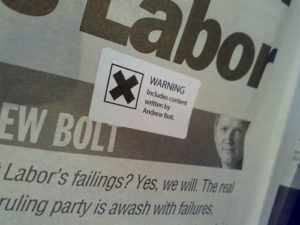 This is in contrast to the front of independence and impartiality behind which the ABC pretends to hide, while their left wing worldview permeates everything they do. When you listen to or read Andrew Bolt, you are immediately struck by the beautiful sense of freedom a man possesses when says what he means and means what he says, who isn’t trying to maintain a cognitive dissonance about his feigned adherence to some charter.

I first became aware of Andrew Bolt’s existence in the 2000’s, by way of the lefty circles in which I found myself. The way they spoke about him, I assumed he must have been illiterate. I assumed that his articles were simply illogical rants put to paper. As my Classical Liberal principles were still forming, I assumed he must be one of those right wing nut jobs about whom the professors and hot girls on campus always used to go on, with whom I should be careful not to associate myself, or even read, given just how intensely angry my lefty acquaintances would become at the mere mention of his name.

It wouldn’t have been until after my switch in the mid 2000’s from reading The Age, which for some reason always left me terribly depressed, to The Australian, which I found uplifting, that I finally summoned the courage to read his poisonous words. I had recently seen him interviewed briefly on a subject, and I was quite surprised to see a suited man speaking eloquently and precisely, and who made a good deal of sense. I had been expecting an obese, swearing bogan. (Yep, I didn’t even know what he looked like.) It occurs to me now that the social pressure not to read anything that he said was akin to the social pressure on the mind a cult follower to avoid thinking critically about the mush you are being fed, lest you reason your way out of the cult’s grip and thus reason your way to eternal damnation.

When I read Andrew Bolt now, and consider how on earth I managed to live so long without reading his columns, I recognise that he, too, is someone who understands the importance of language, of narrative, and of how the left work so hard to control both. He has the grin of a person who knows that even though a kangaroo court, set up by “progressives” and dedicated to promoting “progressive” ideology, banned the publication of one of his articles, the substance of the argument he made in that article was proven correct within a few short years. He is someone who understands that by simply saying what he is saying, and to a certain extent his very existence itself, makes many people on the left viciously, inexplicably angry.

It is for these reasons that I say this; Andrew Bolt is a Bloody Aussie Legend.