In breaking news, the Martin Place Lindt Cafe at the centre of the deadly Sydney siege in December has been attacked, having its windows smashed.

Given that “a man in his 40s with facial hair and tanned skin,” was seen loitering in the area at the time, there is currently an inquest being conducted into the siege, and a total of five rocks have been thrown, it has naturally been assumed that it was simply a random act of vandalism, and has nothing to do with Islam.

What are your thoughts? We strongly encourage irresponsible and uniformed speculation! 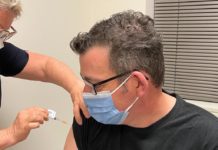 Daniel Andrews plans to be Dictator For Life