Which is a big deal when you write for a news website.

I recently prepared a short comic piece on poverty. While I enjoyed making the comic, the text was hastily written, and frankly struck a sarcastic tone of which (as a person who would much rather build up than tear down) I’m really not proud. In addition, my point was ill made, with several viewers positioning themselves not with myself as I has expected, but with my fictional opponents the “complaining… chattering classes.”

It was a thoughtless phrase, I was wrong to post it so hastily – and it’s a lesson in not sending things when you’re angry.

Criticism to these ends would have been acceptable, appropriate, and potentially spurred me toward improved outcomes. But what I received were intensely personal responses telling me I was using a “childish,”,“holier than thou approach,” (it was a bit) to telling me I was (perhaps tit-for-tat) “completely disconnected with the reality of poverty in Australia.”

I was shocked that they actually viewed me as lacking “consideration and compassion for the lives of others,” Especially when it was my concern for those in poverty which drove me to speak up when I saw others denigrating capitalism (or free trade more broadly). Certainly it’s not a perfect system, and I’m all for refining systems as we learn. But trying to reduce poverty at an individual, community, or national level without encouraging trade is removing an important tool, perhaps the best (although definitely still imperfect) tool we have. Trashing capitalism ties one hand behind our back when it comes to compassionate responses to poverty – and just saying, “Capitalism is bad and does nothing for the poor” isn’t true and makes it harder for us to help those who need help.

Political writing is a dirty game. But when I (naively) requested positive or negative feedback I was expecting comments which would discuss whether improving trade and economies has on balance improved people’s lives. What I really wasn’t prepared for was the following comment which stuck in my mind (and my throat) for several days.

“Stop this. You don’t deserve the impression it leaves of you.”

The comment was unrelated to whether capitalism has the ability to alleviate poverty. It was about me, my character and what views I present publicly. The comment was well-intentioned I am sure; but it was tough. As one colleague remarked on the conversation, “It leaves an impression of an Orwellian focus on control of the message.”

For days afterwards, every time I thought of writing I experienced one of the most unpleasant sensations that someone my age can feel without a dead body in the room: The thundering-alarm-bells-ringing in my chest and well-evolved-brain warning me that I am about to put myself outside the tribe. I felt awful.

Without excusing my haste and sarcasm, criticism of character is one of the most caustic and distressing costs of being a vocal conservative today. We’ve come to expect being on the outer. As conservative commentator Bill Whittle has colourfully remarked, we are the “The Rebel Alliance.”

It’s a positive image. But I didn’t have the courage to join the Rebel Alliance. I was more like Uncle Owen, or C-3PO without the loyalty.
And so I caved. 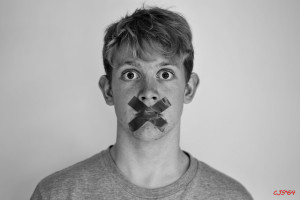 And for the second time this week, I felt awful.

Like when my colleague ran a social media campaign to make ‘Mohammed your Profile Picture.’ He wasn’t asking much, and the image I chose was on point and very tame. But when it came down to it – I was more concerned about being insulted or criticised, than I was about standing up for the freedom of the media, even in this very small way.

I needed time to lick my wounds and reassess how I share my work. Because the consequences of libertarians, classical liberals and conservatives (particularly young conservatives) hanging back are far reaching. Across the country hundreds of little decisions are being made every day to keep our views hidden from public discussion which allows flawed and sometimes damaging viewpoints to flourish.

So I apologise for my thoughtlessness. But I do hope my friends will forgive me for not stopping.

Because the Rebel Alliance is already outnumbered.
And we have a Death Star to destroy.