It’s really quite hard to understand why Universities and both their academic and student bodies seem so debate-shy these days. As a first year undergraduate Boethius fondly remembers days spent in Naughton’s pub instead of the lecture room, the earnest types standing behind tables on the south lawn handing out ‘Resistance’ party literature, and the often spirited debates that took place under the vaults of the Priestly building around student election time. In those days (ca. 1985) one could actually debate a real life Socialist and expect a coherent answer – before about 6pm anyway.

For the conservative on campus, back then as today considered nothing less than a bodily manifestation of Satan Prince of Darkness, it was quite possible to engage one’s political opponent in something that resembled a dialogue, with real words forming actual sentences, and even grammatically congruent speeches. As outrageously novel as it sounds today, a phenomenon known as ‘opinions’ and ‘arguments’ were actually articulated on campus back then, along with metal cans of beer, free condoms, and soft drugs (some things never change). 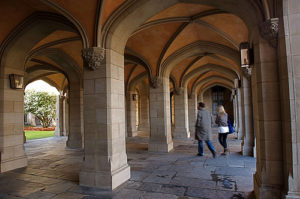 Alas, today’s Socialist student warriors are not interested in debates, ideas or forming grammatically congruent sentences. Slogans shouted by groups of lemmings are de rigueur now on campus. Ensuring the syllables at the end of each sentence of abuse rhyme is about as much intellectual energy as today’s student activists can apparently muster. Rather than debate a proposition, put forward an argument, and engage with an issue, today’s students take the much easier, though intellectually deformed, option, of simply shouting down and ultimately banning that with which they do not agree – from Swedish thinker Bjorn Lomborg, to Christopher Pyne and his tertiary education reforms, to the elected government and its ministers.

It doesn’t sound like fun at all really, and not much at all by way of preparation for life, apart from a career on the ABC, or as a union hack hoping ultimately for ALP pre-selection.