Much to-do has been made in the mainstream media surrounding the appearance of Ross Cameron and Larry Pickering at a Q Society fundraiser. I don’t really agree with Cameron on some of his opinions. Not trying to virtue signal, just stating facts so that this isn’t mistaken for a puff piece. I don’t particularly like the guy himself. Or dislike him. And regardless of whether you do or not, you have to agree that the sentiments expressed by Cameron and Pickering were rather silly and didn’t exactly help their cause.

Before you rush to applaud my moral virtuosity or jump down my throat, let me elaborate. We live in a time when an unscrupulous MSM will take any opportunity to manipulate the truth to suit their own agenda. A speaker at these events has to realise that while the Guardian or Fairfax will never go undercover in the mosque of a firebrand cleric with a hot mic to publish what they really think about the West in lengthy transcripts, they’ll have no qualms whatsoever collecting sound bytes to be taken out of context at a conservative event.

Conservative speakers have to be smarter about what they say, even when they’re joking (as they were). Especially if they’ve had a little social lubricant.

It isn’t just about what they’re saying either. They even need to be mindful of where their hands are. This Herald piece outrageously uses a photograph of what could be Cameron talking about rising commodity prices, for all we know, to imply that he is throwing a Sieg Heil. Even in jest, especially in jest, the last thing that conservative commentators need to be doing is kicking own goals.

But the thing I always find most shockingly ironic in the aftermath of any high profile real or perceived politically incorrect transgression are the denunciations. We’ve seen denunciation as a method of oppressive control throughout history. The Nazis used it to strong-arm people into denouncing neighbours who were then taken away by the Gestapo. In post-war East Germany, children denounced their parents to the Stasi over an indoctrinated sense of duty, party adoration, and capitulation. McCarthyism saw Hollywood denouncing their own colleagues out of self preservation.

Even the Bible tells us that Peter denounced Jesus when things became too hard. Jesus knew it would happen. He was either a miraculous deity, or highly in tune with human nature and the techniques of those looking to end any kind of movement that threatens their own power and control.

Theologians don’t interpret the Denial of Peter as an act of civic duty, or higher morality. Peter was trying to save his own skin. The lesson to be learned from this for believers and unbelievers alike is that it’s a sin to forsake someone who cares about you or aligns with your interests merely to placate or curry favour with those who don’t care about you or your interests, and will get around to you sooner or later when someone denounces you.

The fallout from the fundraiser was predictable. It was to be expected from the more cuckservative elements at Sky News. But like Adam Piggott, I found the hypocrisy and capitulation from Andrew Bolt and Tim Blair staggering. Both of these men have said more controversial things in their own very public columns than either Pickering or Cameron said behind closed doors for a very select audience. To disagree with the speakers is one thing. To suggest that they be howled down and silenced arbitrarily is quite another.

It isn’t inconceivable that Pickering might have taken offence about Andrew Bolt’s article about Indigenous Australians that landed him in hot water. As this scandal shows, conservatives aren’t all tarred with the same brush. But even if he did, would he use the the same logic and applaud the provision of 18C, baying for Bolt’s blood in order to curry favour with the same people who would no doubt come after him at a later date?

All that was required by Bolt or Blair if they were so deeply offended was a more measured ‘we agree to disagree’ approach without trying to normalise the agenda of those that if successful would see Bolt and Blair sent to a salt mine for their thought crimes as soon as the local Stasi were done processing Pickering and Cameron.

In contrast, let’s take a look at how a relative by marriage of Ross Cameron handled the scandal (with more loyalty and conviction than Cameron’s colleagues I might add). A friend sent me a screenshot of a Facebook thread beneath a post about the incident: 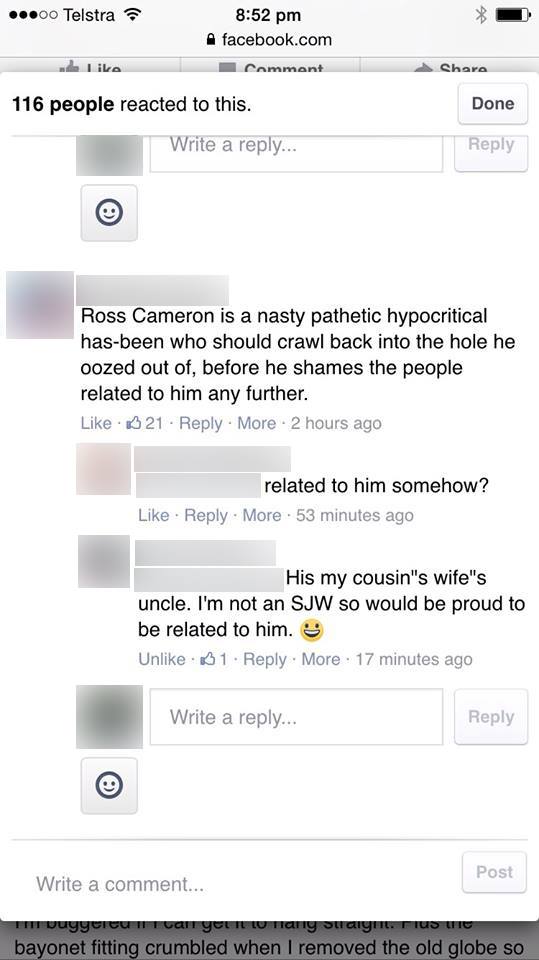 You can see what’s happened. An amateur Stasi acquaintance of somebody Ross Cameron is related to attempts to publicly shame him, and presumably destroy his life or make him repent for the crime of being related to somebody well known who said something off colour. The implication is simple, and the same methodology is used as that of the Gestapo. Denounce your relative, or take his place in the firing squad.

Thankfully, there’s a wise head on those shoulders. The gentleman realises that a signed confession only means a less torturous death. His only hope is to ‘go for the gun of the nearest Kraut’. He does so beautifully and impeccably, taking out the entire outrage squad and Winning the Internet for that day.

You’ll notice that he doesn’t try to defend the comments or make excuses for them. Either position could be a misstep. He deftly points out that it’s way more embarrassing to be an SJW in hysterics over off-colour comments than it is to be making those off-colour comments. He also goes one step further in his successful rebuttal by lamenting that he isn’t a blood relation to the man. Perfectly played. Be like this guy, or like Kirralie Smith whose stock went up considerably over the past few days… don’t be like the Sky News stable.

In history, theology, and mythology, there are countless examples of people being coerced or strong-armed into denouncing their beliefs, principles, loved ones, or peers by their ideological others. Capitulation or cooperation is never a brave or noble act. All denunciation ever achieves is a less excruciating death. Even an informant who has turned on his criminal brethren is regarded as distasteful by polite society. He or she will forever be regarded by criminals and police alike as a rat. The conservative media peers of Cameron and Pickering who are throwing rocks in glass media houses and are denouncing the right of their colleagues to do the same are the ones who should really be ashamed of themselves in light of this whole media scandal.