In what has been a dramatic 24 hours, the AFL has issued a directive to social media users to stop sharing memes making fun of Bronwyn Bishop’s recent indiscretion regarding the claiming of transport costs. An AFL “spokesperson” described it as a logical next step, saying:

When asked whether Adam Goodes or Bronwyn Bishop had, by their actions, warranted such public taunts and humiliation, the AFL “spokesperson” stated:

“That is beside the point. The point is that both Adam Goodes and Bronwyn Bishop are minorities, and as minorities, we have to judge them by a different standard to the rest of the population. It doesn’t matter that Dermott Brereton or Wayne Carey or Karl Langdon used to get booed. As a minority, we have to treat Adam Goodes as a protected species. Likewise with Bronwyn Bishop, it doesn’t matter that other politicians are regularly lambasted for rorting their parliamentary privileges – as a woman, it is important that we don’t criticise her in any way, because, as we learned when Julia Gillard was Prime Minister, to criticise a female politician is sexist..”

The AFL says it is delighted to be able to utilise new surveillance technology to enforce its new directive. They hope they can employ methods recently used to publicly shame former NFL star Brett Favre, who was caught out for not celebrating enthusiastically enough when a courage prize was awarded to a transgender female. Furthermore, fans caught booing minority players, or who fail to celebrate adequately their achievements, will face on the spot expulsion, fines, or even arrest. The AFL “spokesperson” said this should provide a huge boost to employment, as it plans to hire hundreds, if not thousands, of “tolerance facilitators” it hopes can ring every AFL stadium, and hundreds of thousands of dollars have been spent on new brown shirts for said tolerance facilitators, so as to be easily identifiable.

“We hope that this policy encourages football fans to dissemble their feelings, to control their faces, to do what everyone else is doing, and to essentially make tolerance, or at least the outward appearance of tolerance, an instinctive reaction.” 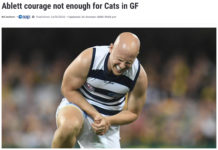 Gary Ablett and the Aryan Spirit