A young British Catholic priest, formally of the FSSP which he left so that he might speak out against the imposter who squats on Peter’s chair, has published an eight minute video in which he does just that.

He has an interesting background, having spent eighteen months in a Burmese prison for protesting “human rights” abuses. That naivety aside, he is undoubtedly a man of conviction and courage who is prepared to put himself on the line so as to make a man of himself. This is ably demonstrated in his stand against Francis and his miserable minions, particularly the execrable Archbishop Roche who is the living embodiment of the lickspittle suckhole who will bend a knee at any time and for any trifle so as to curry favor with the despot of the moment.

So this priest has balls which is something sorely lacking in the clergy of today. He is an example of the Church Militant in action, a critical function of the Church which was entirely omitted from Vatican II. The last thing the Freemason pukes want are priests devoted to the Church Militant. Which is why the effeminate and the fags, (but I repeat myself), have done so well within the Church since then, at least in a worldly sense. How they have done after being sent screaming into the abyss of the afterlife is another matter entirely.

That’s what truly astounds me about these charlatans and infiltrators of the Church. What exactly do they think is going to happen to them when the bill gets served in such a manner? It displays either an amazing lack of imagination or stupidity on a scale that I can’t begin to fathom. You spend your entire life inside a religious institution, particularly in a place such as Rome, and nothing rubs off on you? No sense of wonder, no feeling of awe, no deep spiritual well spring? Just how much self hatred must men such as these possess in order to luxuriate in their own sin while doing their utmost to damn others?

What leaves me dumbfounded is not man’s potential for goodness, nor even his propensity for evil, but instead his unparalleled performance in stupidity.

Which is why in a sense I pity Satan. He gets to collect all of the worthless stupid ones. That’s who he gets to hang out with for eternity. The truly epic level morons. The buffoons puffed up with their own sense of importance. The princes of bores. The flamboyant fools who believed their own lies. What a crowd, what a crowd.

Back to our young priest. He has sacrificed much in order to record those eight minutes. So give it your time and give him his due. Spread it around, and I don’t mean to your friends and family, although they should get it as well. No, you need to share this video with your priests and your bishops. Demand that they watch it and then demand that they provide you with answers as to their own positions.

Make them make a decision. Make them pick a side. Make them live with the consequences of their actions. Sometimes the sheep have to get feisty with the shepherds. 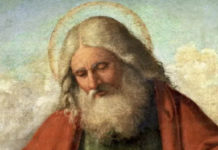