Today I watched the Hungarian Grand prix which turned out to be one of the more interesting races so far this season. Notable mainly for a big double pile up on the first corner, and Alonso holding off the demented afro freak for ten or so laps and thus ensuring his team mate got his maiden win. There’s nothing quite like watching a driver get his first win in F1, and even more so when his exhausted car gives up the ghost before the pits and he jogs back in a state of severe jubilation.

Sebastian Vettel managed to get 2nd place behind the young Frenchman, Ocon. Vettel was being interviewed and I couldn’t but help noticing that he had managed to make a ridiculous face mask even more ridiculous. He achieved this astounding feat by sporting a face mask with a rainbow design. Then I noticed that his helmet had rainbows too. Has Vettel come out as a fairy, I wondered. And then the penny dropped. 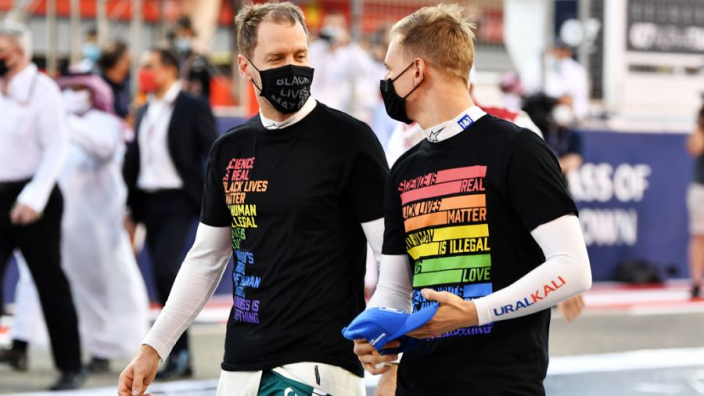 Hungary has been a bit mean to the sodomites recently. We can’t have that then, can we.

Vettel delivers LBGT+ support and warns bigots will be “extinct”.

Sebastian Vettel has warned all bigots their “time is ticking” and that they will become “extinct” after delivering a heartwarming message to aspiring F1 drivers in the LGBTQ+ community.

So there you have it. Apparently a German of all people threatening to make large swathes of the world’s population “extinct” is a heartwarming story. I assume that I myself must be one of zee German’s very targets, since I consider all sodomites to be depraved sinners who identify with their sinful depravity. Not very heartwarming I know, but I can barely keep up with what is de rigor these days.

Now the thing is, Vettel might be very good indeed at driving a very fast car very fast around very fast racing circuits. But when it comes to more mundane pursuits such as critical thinking, he seems to have left his few brain cells at the door of the gas chamber.

Speaking during a fan call-in organised by F1, Vettel denounced discriminatory behaviour and encouraged youngsters to fight for what they believe in.

“I’m quite happy to be in a world where certain topics become more and more aware,” said Vettel.

“I think any form of discrimination towards, not even just minorities, but to any sorts of people depending on where they come from, what they like, their identity in whatever form, is wrong and shouldn’t play a role in deciding on your path.

“So I can only say ‘Be proud of who you are, what you are and what you like and stand up for it’.

So there you have it. According to world super-genius Vettel, any form of discrimination against any sort of people who identify with any sort of behaviour is shameful wrong-think which must be … what was that word again?

“To all the people that are obviously of a different opinion, I think their time is ticking and, you know, they are going to be extinct.”

Ahhhh, yes. That was it.

I would even discriminate against, oh, I don’t know, say an association of people who like to shove pointed objects up the bottoms of racing drivers. I would definitely discriminate against them. But what would Sebastian Vettel have to say to those people who want to stick pointy objects up his Teutonic bottom? I mean, he’s now on record as saying any form of discrimination must be exterminated. What a tricky situation for the poor man. I fear that he hasn’t really thought this one through.

How about thieves then, Sebastian? Say a gang of thieves that want to break into your house and take all your stuff? I mean, their identity is in nicking your stuff. Surely you can’t discriminate against those poor thieves. No doubt they have families to feed. Or at least obnoxious wives with too much botox to keep subjugated. What a selfish Formula 1 driver, wanting to hold onto all of his gains in the face of those who identify as thieves. Unbelievable, really. The nerve of the man.

Vettel drives for Aston Martin and it seems that the team itself were the ones actively pushing the pro-sodomite line.

The German’s Aston Martin team has teamed up with Racing Pride to celebrate Pride Month and raise awareness of the “strength of the LGBTQ+ community within motorsport”.

Not going to buy one of their poxy cars now. I can’t remember the last time I saw a screaming queen tooting around in an Aston Martin. I didn’t think they would be their target market. As for the strength of the fag community in motorsport, who is that exactly? Will the first fag in F1 please stand up and assume the position of, “hello boys!”