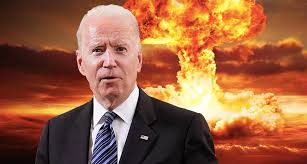 This week marks the first time in the history of mankind that a leader of a nominally free country threatened his own citizens with nuclear warheads. With those words, Joe Biden just overstepped every tin pot dictator and ultra woke female prime minister to become the most lunatic national leader on the planet. Young Kim up in North Korea must be having the time of his life right now.

The case can also be made that he is the most deranged leader in world history. Not only is he threatening his own citizens with nuclear weapons, he is threatening the most populous armed citizenry in history. Not to mention that this comes a scant six months after the most fraudulent election since Idi Amin got a second term, meaning that over half of the country is seriously pissed off.

One of the very first things that the Nazis did was to confiscate all private firearms, and yet Hitler did not send Germany into full war mode until 1944. The reason was that he wanted to keep the German people as docile as possible. But not Biden. Either he is extremely stupid or extremely worried.

I would say that it is most likely equal measures of both.

I won’t go into the utter lunacy of Biden’s infamous words, as far more capable people than me have done an outstanding job of getting very pissed off indeed.

“Bring your jets.  Bring your nukes.  The only way you have to dislodge us off this continent we conquered with our blood and sweat and buried kin is to kill us all.  We will never give up.  We will never surrender.  This will not die with me.  Or my children.

“You will never defeat us.  Never.  Our blood is here.  Here we make our stand.  We can go to no other country for freedom.  We can go no further to a distant frontier.  Despite what you will try to do with us, despite the injustices you will visit on us, we will win.  We will mock you, and your grave will be pulled up and your bones used by our children for their amusement.”

It is important to consider the timing of Biden’s reckless and stupid words. He has only just returned home from a European trip where he met with many other world leaders. Most notably he met with Russia’s leader, President Putin. In Putin we have one of the most capable and confident leaders on the planet, quite possibly the strongest. In the photos of the two men after their meeting, Putin has the look of a very strong man who has just met with his most important rival and has confirmed that his rival possesses the spine and courage of a slug. Biden has the look of a slug that has had its worst fears confirmed, both about itself and its main rival.

With the Arizona audit into the federal election entering its interesting phase and with his great insecurities on an international level, perhaps Biden thought that it was a sound idea to demonstrate his toughness through boasting about flying things that shoot pew pew missiles and nuclear warheads that go boom when you press the red button.

The stupidity of such a threat is that even if he did have the gonads to press the button, all it would do would be to bring fire and brimstone down upon his own head on an international level.

The worst part is that it has galvanized a determined and sudden resistance to his illegitimate rule. The utter foolishness of his words has forced international media outlets into a scramble of coordinated silence. The only recent headlines that I could find about Biden was his success on winning bipartisan support for a massive national infrastructure building program. But threatening to nuke your own citizens apparently isn’t deemed worthy enough for attention.

Trump was derided without end by a media that declared him to be a traitorous madman. But now there is a real madman in charge of the USA and he is desperate and worried. As we speak there is a tragedy of Shakespearian proportions going down in the White House. Things could be about to get very serious indeed. 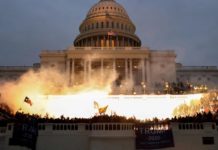