Lately I’ve been re-watching some classic cult dystopian films such as three adaptations of Orwell’s Nineteen Eighty Four, the 1966 adaptation of Bradbury’s Fahrenheit 451, the 1998 adaptation of Huxley’s Brave New World, and Terry Gilliam’s 1985 film Brazil (which was co-written by Jewish playwright Tom Stoppard).

An amusing scene from Brazil depicts two pretentious Jewish looking yentas, deriving their privilege from an oppressive bureaucracy, having lunch at a ritzy restaurant. All of sudden there is a terrorist bombing in the background leaving patrons and staff bloodied and dead, which does little to faze the dining experience of said yentas. The musicians performing in the restaurant brush the debris off themselves and start playing Hava Nagila (composed in 1918 to celebrate the Balfour Declaration).

An article written by Eric Striker last week about Roberta Kaplan made me think how this satirical scene plays out in real life, what with Kaplan and her associates dining out on millions of dollars funneled through a questionable 501(c)(3) to fight White Supremacy.

As we increasingly see what happens under the boot of Talmudic Tyranny it’s not beyond the scope of belief that pigs will deem putting two and two together a crime, at which point we raise the banner of the counter economy to fight the system. 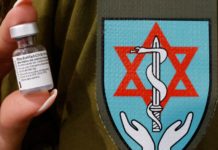 Food For Thought – Is A Humanitarian Nuclear Airdrop The Solution?