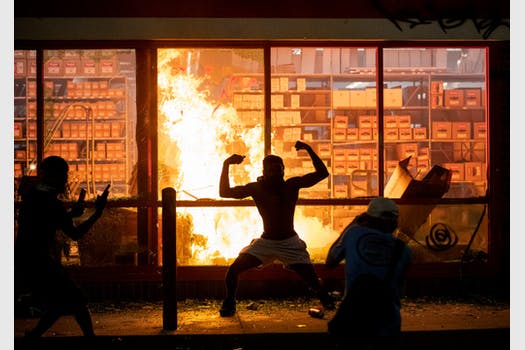 Minneapolis burns, but natives of that city walk away in disgust.

“Many people have asked me to speak about the George Floyd death/murder and the ensuing Minneapolis riots. I have more or less resisted because I do not care. Not because I do not care if an innocent man was murdered, but because Minneapolis (and Minnesota in general) is a failed city/state, full of leftists, parasites, communists, and race pimps, all pampered and enabled by self-loathing, pussy white people who want to bring about a socialist utopia. I hate the citizens of Minneapolis. I hate the people of Minnesota and I am merely biding my time until I can move. This is merely poetic justice watching a potpourri of leftists (SJW’s, antifa, aggrieved black members of the community, spoiled rich kids from the suburbs-turned-virtue-signaling-activists, and simple thieves/looters) destroy a neighborhood/city that has voted-for and doted on leftist political causes EVERY SINGLE TIME. You COULD NOT FIND A MORE PRO-MINORITY, PRO-SOCIALISM, PRO-SJW block of voters than Minneapolitans…who are now watching their city get destroyed by the same leftists they so enthusiastically supported and sucked the cocks of. Meanwhile, the most cowardly mayor and governor in all of history stand by and do nothing, letting their most loyal constituents and neighborhoods burn. It truly is an example of “Enjoy the Decline” and “Enjoy the Show.” You get the government you deserve.”

You get the rioting, looting, arson, and murder that you deserve.

SF-SJWs on Reddit were optimistic that this was all just a right-wing plot to make them question their allegiance to diversity.

Uncle Hugo’s was a sci-fi bookstore of repute. Someone in the comments mentioned that Larry Correria had started a gofundme for the owners. Vox shut that down.

Forget him and his stupid store.

Larry Correia has a GoFundMe going for the owners. Please support!

Why? Because of Cappy’s reasons above.

It’s a race war but it’s not a race war. It’s more than that, much more. And much more complicated. Because white upper-middle class girls from Brooklyn travel 100 miles to fire bomb police.

Samantha Shader of Catskill, is accused of throwing a molotov cocktail at an NYPD vehicle with four cops inside and could be charged with attempted murder. Her sister was also arrested. They weren’t there for George Floyd, and they DON’T live in Crown Heights. #AntifaTerrorists pic.twitter.com/bObpizxAJY

Their parents must be proud. No, really. I bet they are. That’s what self hating liberal prog retards do. The gals are just doing as ordered. And feeling good about themselves into the bargain. Morals are now something that you display, not that you actually do. The ideology that you believe in is your ticket to ride.

“A result of this generation’s explicit knowledge of America’s historical evils was to make social and political morality a more important measure of character than private morality. In the 1950s, your private morality was the measure of your character; in the 1960s, your stance against war, racism, and sexism became far more important measures—so important that you were granted a considerable license in the private realm.“

How can it be a race war if white suburban girls are throwing Molotov cocktails at the fuzz? Because we’ve been divided, and the next step is the conquering. That goes for just about every country in the West, with a few scant exceptions. Divide and conquer, remember that line? It’s been going on for 50 years now. Sooner or later they were going to step it up. This is only the beginning. Soon you will all have to choose which side you’re on.

Think of the Spanish civil war, but without the niceties. No paella for you.