However, police and the media immediately pointed the finger of blame at the driver of a Porsche who was at the scene. From the initial media reports I was led to believe that the Porsche driver in some way caused a truck to collide with the four policemen. Apparently the Porsche was being driven at over 140 km per hour. But this morning I opened up The Australian newspaper website to discover a headline that would look more in place on your average tabloid website. As it’s behind a paywall I took a screenshot of it. 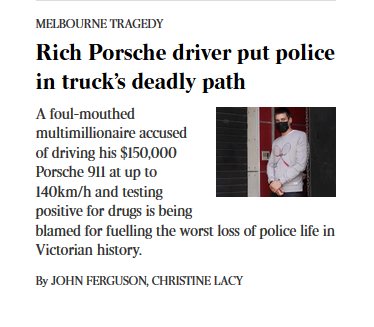 There is a lot wrong with this headline and accompanying summation of the so-called story. I fail to see how being predisposed to drop the occasional naughty word has any bearing on the issue. We learn by four separate declarations that the individual in question is not stuck for cash: Rich; Porsche driver; multimillionaire; $150,000 Porsche 911. This assumes some sort of class envy against the accused.

But what’s really wrong with this required some digging on my part. As it turns out, the Porsche driver had not been driving his car for over an hour when the accident occurred. Two police officers in one vehicle had pulled him over for speeding. Then they had called another car for backup so as to handle the busy freeway scene where they had purposely slowed traffic to 40 km/h as per police procedure. The four officers were stationary on the side of the freeway in the emergency lane when the truck ploughed into them.

So with this information it appears that testing positive for drugs has no bearing on the actual accident and that the only individual who put police in the truck’s deadly path was the driver of the truck. After all, it was the decision of the police to stand on the side of a busy freeway for an hour while they were in the process of impounding the first driver’s Porsche. Sorry, the $150,000 Porsche 911.

We also have on that news snippet a nice photograph of the accused. Now by all accounts he doesn’t sound like a particularly pleasant individual. He allegedly took photos of the dead and dying police officers and posted them on social media. Apparently body cam footage from one of the dying police officers captured the man complaining at the state of his vehicle which was badly damaged in the accident. And to top it all off he then allegedly fled the scene which I find strange as it’s rather hard to flee the scene on the Eastern freeway when you don’t have a vehicle. Like I said, the media are really having a good go at him and there is plenty to dredge up.

But I found it strange that there was no information at all on the truck driver. While the driver of the Porsche has had his photo, personal details, and sordid history plastered all over the media, the only thing that I could find out about the truck driver was that he had been taken to hospital. Little alarm bells began ringing in my head. Could it be possible that the truck driver might be of an ethnic background? 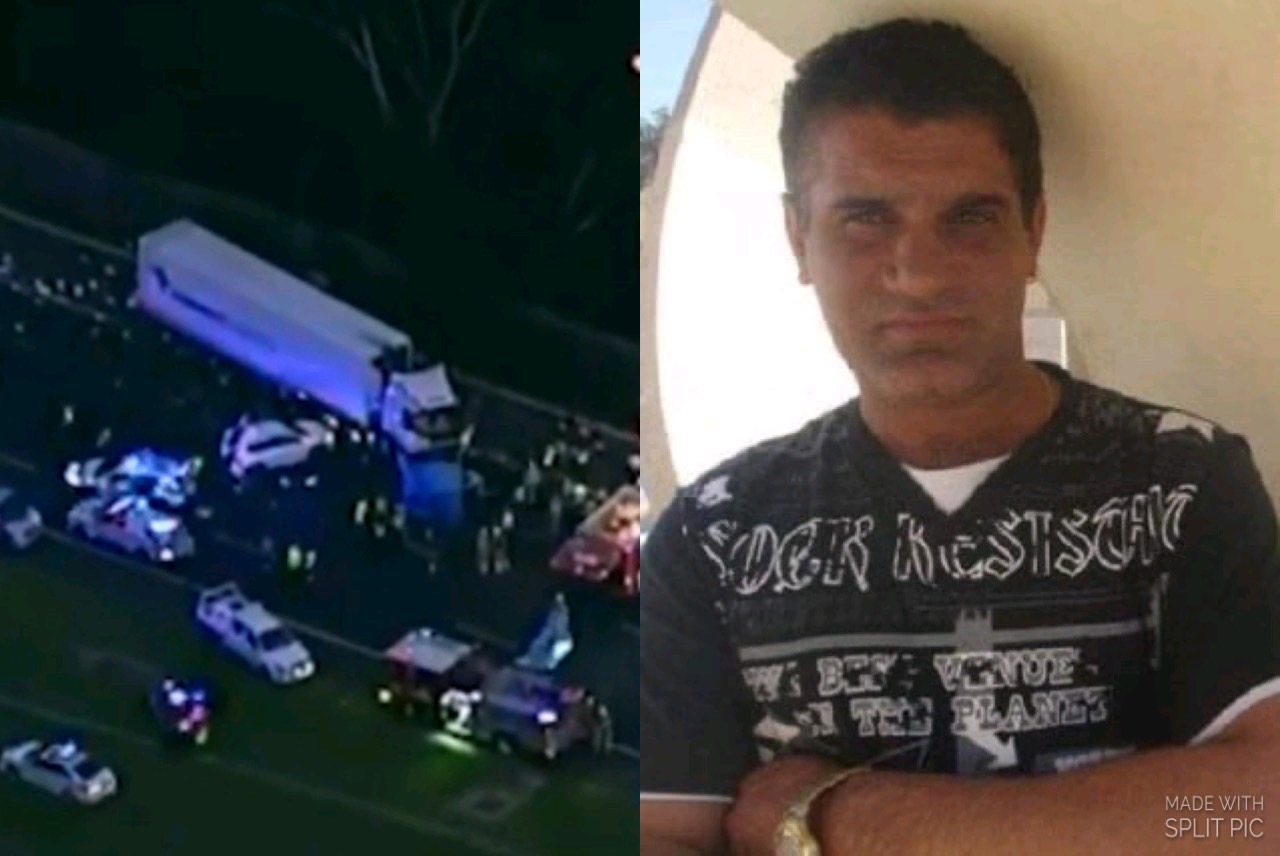 Detectives investigating the tragic collision that killed four Victorian police officers — the single biggest loss of police lives in the state’s history — will look at what made a semi-trailer veer into the emergency lane where two police vehicles and a Porsche 911 were stopped.

Victorian Police Commissioner Graham Ashton told reporters on Thursday morning police have yet to interview the driver of the refrigerated semi, Mohinder Singh Bajwa, who is under police guard in hospital.

Mr Ashton said Mr Bajwa suffered a “medical episode”, “which seemed to involve him blacking out”.

As traffic was slowed to 40km/h at the time it seems rather criminal to be driving your semi-trailer at 100, let alone doing so in the emergency lane. But there is further interesting information in that article regarding Mr Bajwa.

The Commissioner confirmed police attended the truck driver’s home in Cranbourne, in Melbourne’s southeast, and carried out a search of the premises.

“What was found at that premises is still the subject of ongoing investigation,” he said.

The driver of the truck was not known to police and did not have an “extensive criminal history,” Mr Ashton said.

Which means that he has a criminal history of some sort, at least according to that direct quote from the Victorian police commissioner.

Okay, so why is the fact that the truck driver of Indian ethnicity important? Well, consider what I wrote on this exact topic almost a year ago.

But it’s what’s not being said that is instructive as to a rather large indicator of the cause of the carnage on our roads. For Victoria is the preferred settling place of choice for the hundreds of thousands of Indian immigrants that reach our shores every year. It seems that nobody has given any consideration to the effect on the road toll of importing huge numbers of third world immigrant invaders who are already in possession of a valid driving license from their countries of origin. In order to get a driving license in these countries one simply has to pay a bribe. And Australian state governments honor these licenses. In fact, there is not a single country in the world that issues a driving license that is not honored in Australia and subsequently converted into a valid Australian driving license on request …

… The reason for this state of affairs is the fact that Australia is a driving license laundering service for the third world. We have no standards that we impose on the people immigrating here as regards to their driving qualifications, and as a result we also have no requirements as to their actual driving abilities. After all, such a requirement would be racist and we can’t be accused of that modern mortal sin.

Hence the inherent stubbornness of the road toll not to follow bureaucratic instructions to decrease. Third world peasants have a tendency to drive like third world peasants. Unfortunately they do not follow the magic dirt theory of civic nationalism when they arrive and suddenly all become Mark Webber. It seems that those western values which are supposedly just a system that can be easily learned do not extend to magically inheriting civic nationalist driving skills.

This has knock on effects in other aspects as well, not just the road toll or the worthlessness of our driving qualifications. Consider truck driving, a career of choice for many young working class Australian men. The cost to get a full truck driving license in Australia runs into the thousands of dollars. It’s a significant barrier to entry for men who traditionally have that much money to invest in their own professional education. But dodgy truck driving licenses from countries such as India are honored in Australia. Which is why so many commercial trucks in Melbourne are now being driven by Indian immigrants. Of course, the prog left will fob this off as simply yet another example of a job that native Australians don’t want to do which is why we have to import all of the foreigners. But of course this is a giant lie; Australians do want to do these jobs but they’re simply being priced out of the market, not only in wages but in the qualifications required to get the jobs in the first place.

And finally, just for good measure:

But the authorities cannot dare approach their obsession with the national road toll from this perspective; to do so would be career suicide. Just the thought alone that all these millions of third world immigrants, might, just might be having an effect on the driving population at large is complete anathema to them. Perhaps if they started releasing the road toll and criminal vehicle negligence figures by race we might gain a clearer understanding of the underlying problem.

Not going to happen though when your national religion is multiculturalism.

It appears now that their beloved multiculturalism has helped to cause the worst day in Victorian police history. What a way for the curry chicken to come home to roost.

Let me posit a final question to my good readers. If the two individuals involved in this drama were reversed; that is to say, if the Indian chap was the driver of the Porsche and the white guy was the driver of the truck, just how do you think the subsequent media frenzy would have played out? Would it have been the Indian in handcuffs across national media or still the white guy?

I know where my money would be.