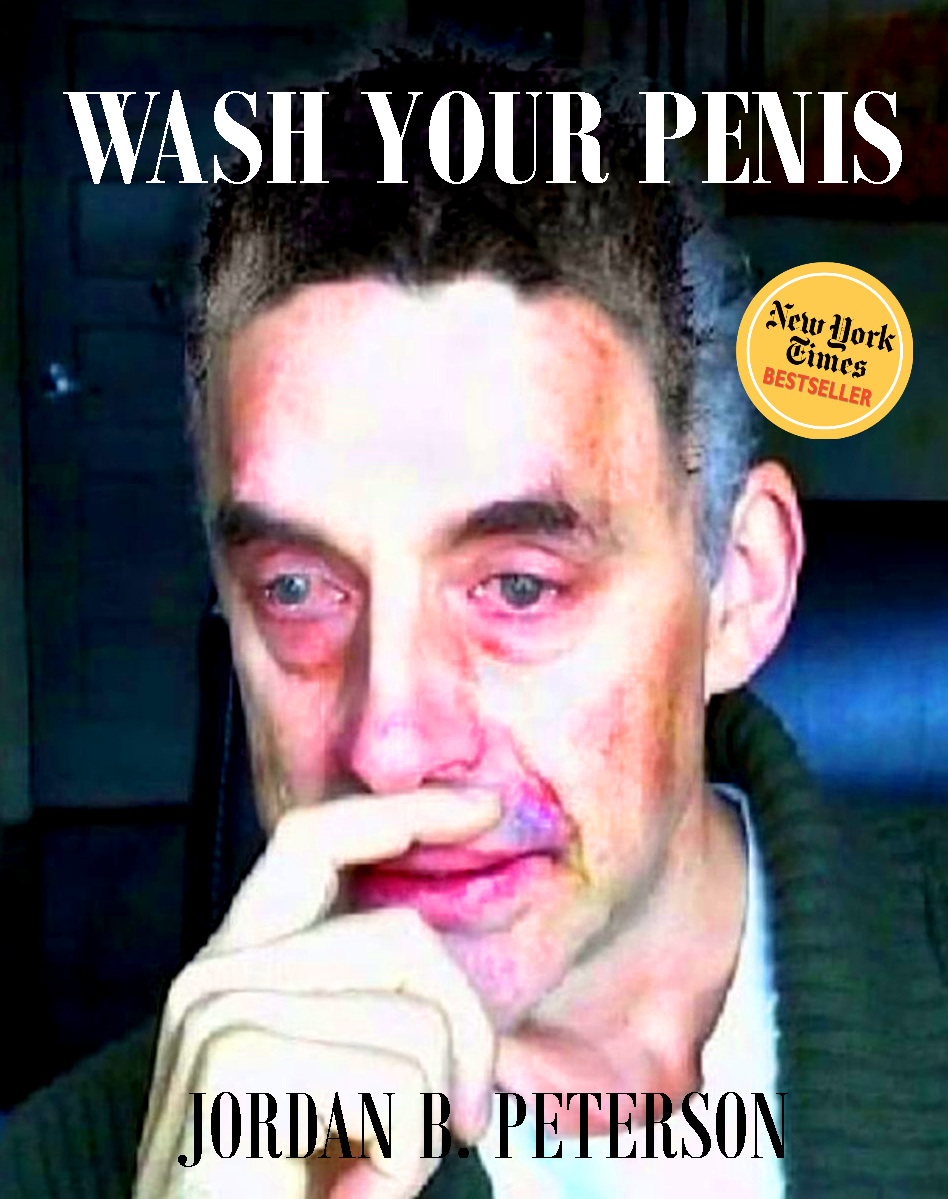 In my podcast this week I took some pleasure in performing an “I told you so” broadcast concerning the dear professor of Communist lies, Jordan Peterson, who is now reduced to an incoherent lunatic due to his addiction to various medications. Al linked to it and he had some choice words on the topic.

“… when they both came out quite unequivocally against Peterson, I listened, I considered their viewpoints, and I decided that I agree with them. It wasn’t a period in which I was active on this blog, but I was still active below the line on various sites that invite comments, and I found it amusing how people reacted to any suggestion that Peterson was not what they thought he was. People were afraid that to question their opinion of Peterson was to attack their fundamental identity. Personally, I found it bizarre and just another depressing example of how dim-witted most people are. Or, as Vox Day puts it, ‘MPAI’.

“They were right. There are myriad other examples of times they have been proven right by events, and that is why in-spite of how grating I sometimes find their sense of moral certainty and the supposition that their personal experiences can be generalised to the whole of humanity, I still read their content, and give it due consideration.

“Certainly, whatever I think of their grandiose opinions of themselves, Day and Piggott are both far more reliable analysts of current affairs and human nature than people like Delingpole and his cuckservative chums are.”

Anyhoo, I thought that I might take this opportunity for a trip down memory lane, a look back over my shoulder at my own journey of believing that Peterson was on our side to doubting his motives and then to understanding the true nature of things as regards this man. Once again, another wolf in sheep’s clothing will appear in the near future. But Peterson was such an excellent example of this that when the time comes I will use his name as a synonym so as to really ram home the point.

I doubt that many of Jordan’s former, (and still current, believe it or not), fans on the right will learn from this experience, unfortunately. The above acronym ‘MPAI’ stands for ‘most people are idiots’, and unfortunately for that malaise there is no known cure.

If I have missed any, please let me know.

It all started with an article that I wrote where I very hesitantly approached the idea that maybe Peterson wasn’t all that he was cracked up to be. I was still formulating my own ideas on the subject at the time, so writing the article was a bit of a step into the unknown for me, but I felt that I had to give it a shot. After all, you find out where you stand by putting your ideas out there, right?

Not only is Jordan Peterson not an alpha male, he’s a member of the left intelligentsia.

“A great deal of what Peterson says about men is true, but that does not automatically mean that he himself embodies those traits. Peterson is a clinical psychologist and a professor at a university. His job is to observe and analyze and in that regard he is at the top of his profession, (which itself is rather low hanging fruit). But for some reason people, particularly women, assume that his accurate analysis means that in this one instance he himself must be that which he talks about.

“It is interesting that Peterson himself does not attempt to disabuse people of this false notion.”

A few days later I discovered how clearly I was over the target, when Peterson himself tweeted in response to my article, accusing me of being a “misogynistic antisemitic right-wing identity-politics ideologue”. I couldn’t believe that he put out the tweet as it merely confirmed what I had suspected but which I was only tentatively approaching. With all doubt dispelled, the gloves came off.

The exposure of the real Jordan Peterson.

“All of you who think that Peterson is on the side of men need this wake up call. Peterson doesn’t want you to be good at being men, he wants you to be good men. Good provider men for women everywhere. Good men who will do as they are told. Peterson is telling men to clean up their room? Give me a break. Our grandmothers were saying that. He’s not saying anything new, he’s just repackaged it in a brown cardigan.”

By this stage his fan bois were starting to lose their collective minds. Matty at XYZ Magazine published a long and incoherent piece attempting to put me in my place. So I took it apart.

“Peterson is an active proponent and participant in the self-destruction of Western Civilization through his ideological adherence to the narcissistic cult of the individual and in his continued attempts to sever the connections that bind people through culture and race. This is bad enough but the fact that he is also a very big wolf in sheep’s clothing makes him much more dangerous than your average progressive nutjob screaming for the head of every straight white man.

“It behooves us as seekers of truth and defenders of the legacy that has been passed to us by our ancestors to thoroughly examine anyone who makes such broad reaching claims as Peterson does. The fact that not only do his claims not stack up but that a closer examination reveals someone who is entirely discreditable should be deeply alarming to anyone even remotely interested in defending our civilization and way of life from those that would have it destroyed and us replaced.”

Next up I examined Peterson’s predilection for using long and convoluted words and sentences.

“Peterson’s answers are incredibly complex because Peterson deliberately constructs them in such a way that his answers are opaque and clouded in obscurity. Nicholas Taleb holds particular disdain for those who deliberately confuse and complicate language in order to seem more intelligent, worldly or knowledgeable on any given subject manner.”

For the next 6 months I had nothing to write on the mad professor, but then Vox Day released his own book on Peterson so I figured that I had to give it a review.

“Peterson’s sentences are convoluted labyrinths of madness. But his skill lies in spreading just enough recognizable symbolism throughout his screed that an intelligent reader will both identify with the text while simultaneously refusing to admit that he has not actually understood it.”

Then Peterson was invited onto Q&A so I had to write about that.

“I don’t know what’s sadder; the fact that Peterson is so obviously approved opposition or the fact that so many people on the right just cannot see it. But he is their new Messiah and they will celebrate him. Look, you don’t get an invite to this show without being part of the show.”

Then I let him go for 10 months, that is until he checked himself into a clinic for severe depression.

Peterson’s lunacy reflects on those who mindlessly followed him.

“The man is an insane weakling who suffers from moments of intense clarity. That he managed to sell you on his crazy rules for living the life of a lunatic reflects more on those who took him seriously than it does on him. Yesterday I wrote on the importance of thinking for yourself and now this happens. People, people, people. Wake up and stop listening to the charlatans of the world.”

“But that would require real effort, wouldn’t it. Far easier to lap up the offerings of the latest guru than to really dedicate yourself to becoming a man worthy of the name. Did you get all weepy when he was bawling his eyes out on stage? Did you dream that you could go on a private retreat with your guru to the woods where you could whip each other with birch twigs, howl at the moon and discover your true masculinity while confessing your childhood sexual fantasies for your grandmother?”

The internet went berserk over that one, so I followed it up.

Bring out your NPCs.

“The Peterson fan boiys descended en masse to defend their poor great guru from the dastardly attacks of the horrible Adam. Which is exactly what the editor of XYZ, David Hiscox, and I expected. It’s happened every time. As I commented to David, Peterson could run naked down the street while drooling and screaming at the sky and he would still get a free pass.”

And that’s where we arrive at today, with Peterson entombed in a Russian mental clinic. I’m not sure if he’s running naked down the street but the drooling and screaming at the sky seem right on the money.

Will he continue to get a free pass from those who so wanted him to be their new Messiah? Of course he will. When you’ve turned away from God, anyone will fit the bill as long as you want it badly enough. That’s the lesson that I have learned in all of this. You can’t reason with the lost.