Let me tell you a tale of great tragedy. A tale of a beautiful young woman who believed the lies of the sexual revolution. A young woman who was cast out into the world and fed to the wolves. If she had been born a few decades earlier then she would have been protected from the evils that have befallen her. She would have most probably had a good life, with a loving husband and children, a family to call her own and a home that she would have built up with her efforts.

But feminism destroyed the family and so she too was destroyed. How is it that women can go along with such ideology without realising that they are also part of a family? In fact, healthy families are refuges for mothers and children from the ravages of the world. They are the original safe spaces. Nobody needed safe spaces when there were healthy families. Feminism destroyed families through the back door; by fault free divorce, abortion on demand, the demonisation of men, and the relentless push to make women work.

So let this woman be a warning to others. This is what awaits you in the brave new world of being a strong independent woman. A broken life of loneliness, degradation, humiliation and sickness of the mind and body. I give you the story of former Australian supermodel, Kate Fischer.

This is what Kate looked like at the height of her powers. 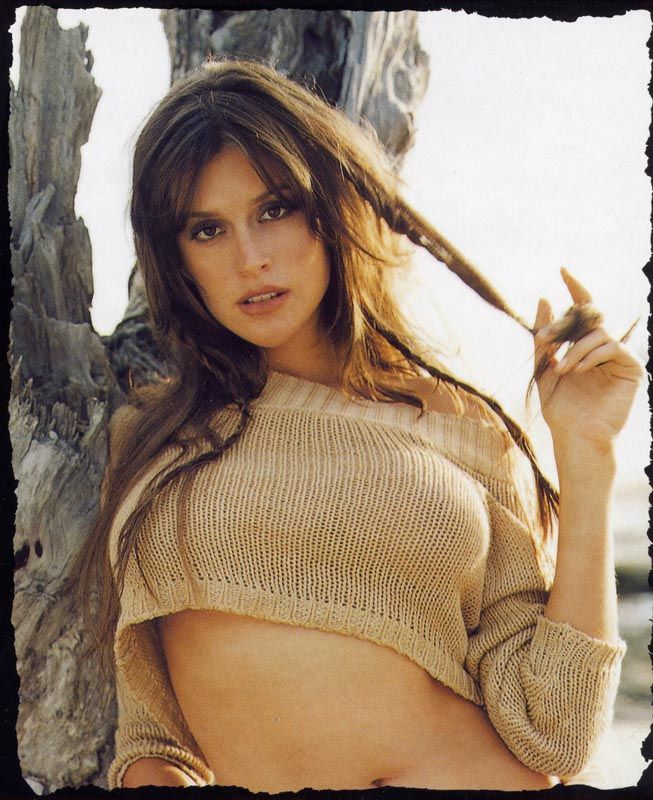 At the age of 13 Fischer won Dolly magazine’s cover girl competition. That was in 1987 and from there her life was defined by her sex appeal. Her high point was in the late 90s, but from there it went downhill. She had money, fame, beauty; she had everything according to what the modern world says that you need to have.

So why has she been a broken mess for the past 15 years?

She can rattle off the names of dozens of celebrities — Australian and international — she has shared her sheets with, but her ­experiences have not always been positive.“It’s a strange thing for me, sex,” she says. “Because from an early age I was abused.

“For years I wished I was normal. Every girl wanted to be me but I wanted to be every girl.“The modelling and everything else was fine. But every man I met wanted me to be their claim to fame. I’ve f..ked over 100 of them but they all wanted to have sex with Kate Fischer, not with me; they want to have sex with an icon. It’s disgusting.

Kate is the original pump and dump. Sex defined who she was so sex was all that she had. Slept with over 100 men? That’s a disturbing notch count for a guy, but for a woman it is simply devastating. How devastating? Well, search for photos of her now and have a look at the results.

On top of this she has become infamous for her late night Instagram meltdowns where her attention seeking gives new meaning to what it means to self destruct.

The former actress, model and I’m A Celeb contestant, who used to be known as Kate Fischer, posted explicit, close-up photos of her bare breasts and pubic hair among the photos, all of which were uploaded to her Instagram account in the early hours of Friday morning.

Many of the photos were posted without context, however in several captions Malkah referenced a “look book” that she was pulling together.

She changed her name to Tziporah Malkah after converting to Judaism. And today after squandering millions of dollars she sits alone in a tiny apartment in Kings Cross in Sydney where the local police visit her on a regular basis due to complaints from her neighbors.

“I’m not cookie-cutter; I’m challenging,” she says. “I challenge everything. I’m challenging ideas about beauty, and sexuality, and humanity, and people, and men, penis, vagina, women. ­People say, ‘Don’t post any more on Instagram’. Argh! You tell me not to do it, I do it more.

Obviously she is a broken woman. But where are the feminists now? For some strange reason the usual suspects in the misandrist feminist camp are as silent as Kate Fischer’s phone. The reason for that is because Kate is an embarrassment to them. The trajectory of her life is in stark contrast to the fairy tales that feminists spin as they sell to impressionable young women the lie that they need a man like a fish needs a bicycle.

Kate Fischer is an abject example of what happens when we do not protect our women. Women need protection from themselves, from their self destructive natures. Fischer has quite obviously spent her life in desperate search for the boundaries that she craves, but because of her gifts the boundaries remained allusive. She is a high profile example of what I have said in the past, that feminism kills women, as was intended.

Hold up Kate Fischer as a grim warning to your sisters and daughters. A woman needs feminism like a moth needs a flame.