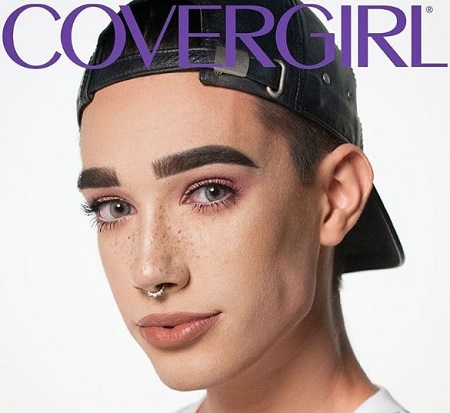 The Other McCain has an interesting piece about James Charles, a teenage homosexual makeup influencer, whatever the hell that is, whose career got torched this week due to infighting, bitching, and general backstabbing in the camp fashion crowd. Apparently our young homo pissed off a former loyal ally by aligning himself with the ex-ally’s main competitor. In order to turn the tables, the jilted woman revealed that the makeup boy routinely makes a habit of seducing and sleeping with heterosexual men.

Here he was openly bragging — on a YouTube channel with millions of subscribers — that he considers it “winning” to seduce heterosexual men, and yet no one would call him out on it, because you’re a hater if you find this offensive. You bigots need to get “woke” and realize that homosexuals have a right to pursue any partner who strikes their fancy.

I’ve been writing for some time about this predilection of homosexuals not just to sleep with straight men but the tactics that they employ to do so. For example:

But let me tell you about a very dirty secret of the homosexual world, a tactic that I was specifically warned about by a gay man not much older than I was when I was a very young man in the entertainment industry. This man warned me about not going to any late night parties where the host was a gay man. The tactic went like this:

This is what is known in the gay world as a conversion.

I have been mocked and ridiculed by conservatives for explaining this to them because apparently this sort of behavior cannot exist. Well it does exist and this nasty little piece of work has publicly confirmed it. What surprises me is the overboard reaction to his behavior. Apparently he is hemorrhaging Youtube subscribers and has the biggest single day subscriber loss in the history of the site. This is in conjunction with big name personalities who were previous supporters now throwing him to the wolves. It almost seems coordinated.

But gays are supposed to be sacrosanct. They are immune from criticism as long as their individual politics are in alignment with the prog left. And here we have one of their superstars who has become a multimillionaire at the age of 19. This guy was literal progtard royalty and then in an instant he has turned into shit. Overnight he has gone from an untouchable in a prog sense to untouchable in a Hindu caste sense.

How curious. Why shut him down so quickly and effectively? Why turn him into a literal leper? And how did his female enemy know exactly what crime to publicly accuse him of?

The answer to this is hidden in the widespread duplicity of the gay community as regards to this topic. They do prey on straight men and they do convert straight men. It is a thoroughly unseemly and unacceptable behavior pattern, but is that all of it? Well, no, it’s not. Here is the elephant in the room in a pink nighty:

If you can deceitfully convert someone into being homosexual then homosexuality is not natural. And if homosexuality is a choice, whether consciously or not, then you are not born with it, you merely fall into it. Which underlines its status as sin. Taken the next step this means that every Churchian attitude towards homosexuality is fundamentally flawed. Now, we know this, but this is what they hide behind. That gays are born this way and are thus blameless in the eyes of God.

Way to burst a bubble, guys. This is why they have come down so hard and so fast on James Charles. He did what you must never do which is to publicly undermine the narrative. The last thing that the gays want the general public to do is to connect the dots.

This article was originally published on 16/5/19 at https://pushingrubberdownhill.com/, where Adam Piggott publishes regularly and brilliantly. You can purchase Adam’s books here.