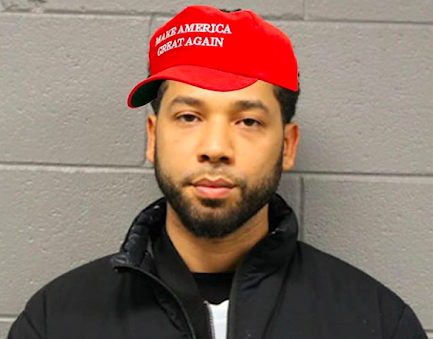 I was rereading my piece from the other day titled, Be careful what you wish for, about the Jessie Smollett case and fake hate crimes when a sudden realisation came over me; an incredibly depressing realisation at that.

“That’s a pretty impressive list, all the more so because it is undoubtedly incomplete. And the truth is that fake hate crimes and real hate crimes cannot coexist with one another for the simple fact that if there are real hate crimes present then there would be no need to invent the fake ones.

“Jessie Smollett attempted to frame and thus imprison two white guys, any two white guys would have done just fine. That means you and me. Grab a couple of crackers to go down for it, hopefully they’ll get it nice and hard in the can.

“A fake hate crime is a real hate crime; it’s simply the inverse of what it was purporting to be.”

I’ve been hoodwinked, sucker punched, bluffed, sucked in, swindled, gypped, scammed. They pulled a fast one over me, your honor. Then they took me to the cleaners as well. But the worst thing about it is that they fooled me. They Goddamn fooled me. It hurts to say it. It pains me to say it, but I have to put it out there.

Because they fooled all of you who read that piece as well. Not one of you identified the giant con that the progressives perpetrated against us with Smollett. If you had have identified the con then you would have said so in the comments. We all got taken in, dear friends. Every single last damn one of us.

Because there is no such thing as a hate crime. There is only crime, full stop. The term hate crime is so dangerous because it opens us up to prosecution based on our personal opinions and the manner in which we choose to live our lives. It means we are vulnerable based on what we believe not necessarily what we actually do.

They got us with their twisting of our language, their perversion of our words, and words are all that we have at this point in time. In a short space of time they have got us using terminology that makes no logical sense at all but whose every use furthers their agenda.

I only realised this while I was reading this piece over at Roissy’s this morning. It is a long and detailed extrapolation in the utter bullshit behind the statistics of so-called hate crimes. It debunks all of the prog left’s talking points on this matter, but the more that I read it the uneasier I became, until it dawned on me that a hate crime is an invention that does us no favors at all, even if we are the victims.

And at the end of his piece Roissy came to the same realisation:

Smollett is undoubtedly a grade A idiot, but he is their grade A idiot and a useful one at that. Because of him the term hate crime is cemented in our lexicon. It is now a part of our language even though its existence debases so much of what we take for granted in our Western cannon of law. It fuels the prog left’s march through our culture and societies. And I see no way to reverse this duplicity. It is a depressing realisation.