I’m not one for making predictions for the coming year as it’s not a particular strength of mine. I’ll probably get most things wrong and if I manage to get a few correct then that would probably be down to dumb luck more than anything. What I do find interesting is looking back at the year that has just passed. It’s so easy to take for granted things that just 12 months ago were unknown, unthinkable, or just plain crazy.

2018 was the year of the awakening for normies. The reason for this is that it was also the year that the prog left pushed as far as they were able to, not due to any limitations of permission but more from a want of energy and resources on their part. The progs acted with impunity not only because they are able to but because when things turn against them it will happen fast. One must make hay and all that.

I had thought that the culmination of their degeneracy was the celebration of a 10 year old boy dancing for money at a gay strip club. But The Z Man has unearthed the real chilling peak of 2018 leftist ideological hatred.

“This story from the New York Times was bouncing around among dissidents over the holidays. It tells of a black women who got her feelings hurt on Twitter a couple of years ago. The people in charge used her sadness to force one of the people making her sad to confess to imaginary crimes and agree to spend 200 hours in a reeducation camp. Additionally, the black girl will monitor his behavior and determine if he is sufficiently submissive to her, before he is released from custody.”

Following the link I discovered this little gem:

“As part of the settlement, Mr. McCarty agreed to assist Ms. Dumpson in her legal efforts against his two co-defendants, Mr. Anglin and Brian Andrew Ade.

“Mr. McCarty must also apologize to Ms. Dumpson in writing and on video. She may use his video for “civil rights advocacy, outreach and educational activities,” the settlement states.”

“He agreed to undergo anti-hate training and at least a year of counseling, complete four academic courses on race and gender issues and do 200 hours of community service related to racial justice. Ms. Dumpson’s legal team will monitor his compliance and can inflict monetary penalties if he does not comply.”

The progs brought enough pressure to bare that the defendant went turncoat against his co-accused. That pressure was not simply legal; it was also social. The defendant is an outcast, dutifully and triumphantly exposed in the mainstream media where all of his sins were laid bare.

But the accuser’s legal team are not just enabled moralizers; they are arbitrators of virtue, able not only to dictate what is and what is not permissible, but also to summarily impose financial penalties if they themselves do not find the accused compliant.

In other words, judge, jury, and executioners. The prog left’s literal wet dream.

The left are overplaying their hand because their lack of standards and self control allow no other conceivable path. They will only stop when they are destroyed. Quietly, normies are waking up to this. The spontaneous yellow vest protests are the other side of the 2018 lucky coin.

With this as a backdrop we then find ourselves the fortunate recipients of the wisdom of Angela Merkel as she makes a rousing end of year speech where she announced that nations no longer have a right to individual sovereignty.

“German Chancellor Angela Merkel gave a very troubling speech yesterday to the Konrad Adenauer Foundation in Berlin where she said, “Nation states must today be prepared to give up their sovereignty” and that the will of the people on issues like immigration and border security doesn’t matter.”

What is it with the Germans and their compulsive addiction to eliminating the ability of neighboring states to govern themselves? Didn’t we fight a couple of major wars with these clowns over this issue? If normies were uncertain that the EU project at its core is the Germans’ third attempt at a collective European political umbrella, now let there be no doubt.

French grandmother-botherer and sometimes President Emmanuel Macron said much the same thing on Remembrance Day when he declared that “patriotism is the exact opposite of nationalism [because] nationalism is treason.” And if you can get your head around that double self-canceling negative absurdity then I doff my hat to you.

The fact that the French working class proceeded to tear apart the country not long after those words were spoken seems to have somewhat eluded the great globalist cabal. One can picture Macron’s geriatric wife leaning out a window and declaring that the Frenchmen rioting over not being able to afford the price of gasoline should simply all go and purchase an e-car. The modern iteration of letting them all eat their cake.

Where all of this is leading is a dramatic replay of The Spanish Civil War but on a global scale. These graphics care of Roissy underpin the great political divide of the last 40 years that is reaching a peak from which conflict may well be inevitable. 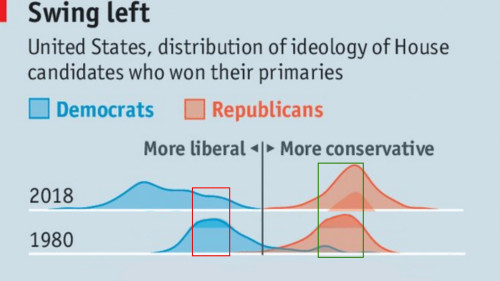 Notice that the prog left has moved much further and faster than the right in comparison. But the right is catching up. The boundaries are being starkly outlined and what any serious student of modern history knows is that the two sides in the Spanish conflict absolutely hated one another.

“By 1935, left-right opinion had become so polarized that there was practically no middle ground left. Both sides came to distrust democracy because it was the means by which their enemies might take power. And, as one Nationalist interviewed in the documentary puts it, people on the left and right just flat out hated each other. The whole country was a powder keg.

“By the 1936 campaign, the centrist parties had practically disappeared.”

Maybe I will make a prediction for 2019:

The year of the powder keg.