We would be tempted to label this video by DWECK, which portrays a hero firefighter who rescues a family from an inferno being reduced to an evil white supremacist white trash abuser of Guatemalan children by the far-left legacy media, as satire:

However, given it uses an audiovisual medium to represent contemporary injustices in the modern world, it is more than just satire; it is art.

How does this art make me feel? It makes me feel like – Why do we even bother? It highlights the growing disconnect I feel towards the society in which I live, and demonstrates why I am more reluctant to help people. This is important.

Moving forward, pretty much every guy I know would skim past the following advertisement: 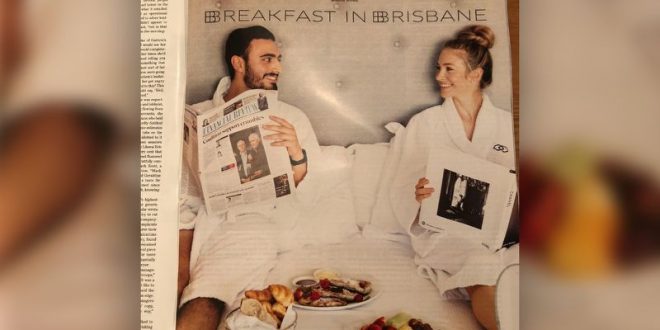 The chick is pretty, but she isn’t showing much, so whatever. When I saw the following headline… ..I thought that maybe some SJWs could be upset by the pairing of an apparently all-white couple, or perhaps the display of a little too much male inner thigh had triggered a feminist. But no, it was the fact that the man was reading a globalist rag while the missus was reading some house furnishing thingy:

“The photo of a gorgeous robe-clad couple enjoying some morning reading over their luscious breakfast in bed may look pretty appealing.

But the choice of reading material and placement of food has, according to critics, catapulted them straight back to the 1950s. In fact, one suggested it looked like a scene from Mad Men.

While the man catches up on the business and money news in Australia’s Financial Review, his partner is leafing through Chanel’s coffee table book.

The suggestion that only men understand finance, while women enjoy lighter material for their daily read, left numerous viewers with a sour taste.

Liv Caisley said: “Ugh this ad is seriously misguided. Believe it or not, we’re capable of a whole lot more than just looking at pretty pictures. I know what I’d prefer to read.”

Now for the best bit. Some fatso was triggered by the fruit platter:

“Others were annoyed with the placement of the breakfast selection, Kumi Tauchi tweeting: “Of course the fruit platter is on her side, she’d be loathed to touch the baked goods…”

And Sofitel actually apologised for this:

“Sofitel has apologised for the ad and confirmed it has been pulled from any future publication.

The hotel group replied to each critic, ensuring them the portrayal was never meant to cause offence.

“We appreciate you voicing your concerns. There was no intention of portraying a stereotype, but we recognise it and apologise for any offence it has caused,” it said.

(The XYZ understands that the copy of the Financial Review will face administrative action next Thursday, and an AVO has been placed on the fruit platter, which is required to stay at least 10 metres away from any SJW, although this may be reduced to 5 metres if it remains uphill of said SJWs.)

One of the qualities that is most lacking in the typical SJW is self awareness. I think subliminally they feel it, but consciously they have no understanding of the fact that their inability or refusal to contribute to producing the next generation, and their tendency to undermine group cohesion means that SJWs produce nothing of value.

SJWs are, for all intents and purposes, worthless people.

SJWs are kept alive merely by the fact that they exist in a civilisation where the state holds a monopoly on the use of force, and they generally control the levers of the state or are held to very low standards of responsibility in order to keep them alive.

This lack of self awareness becomes important when considering my gut reaction to the earlier video. Every instance such as this, every social media storm, every false rape accusation, every attack on a founding principle of a Western country, undermines civility just a little bit more. It either stokes the maelstrom of the reaction which will one day sweep them away with maximum brutality, or it will encourage those who keep civilisation running to try a little bit less, until one day we don’t try at all.

If we do all Go Galt and Western civilisation collapses, then SJWs, whom as mentioned provide no value to a group by way of their tacit infertility and their likelihood to create trouble, combined with their low land speed, poor stamina and sizeable rumps, may well find they very quickly go the way of the woolly mammoth.