To publicise the attacks and the abuse that women in Iran are subjected to when they defy the religious law and remove their Hijab, women have taken to filming themselves removing their Hijabs and the ensuing encounters. This has started the movement #mycameraismyweapon and has brought about the White Wednesday movement, whereby many Iranian women, at their own peril, are taking to the streets without their Hijab.

Brave women are removing their Hijab and are openly flouting the dress requirements whilst taking pictures and videos of themselves and posting them online, to encourage other Iranian women to take a stand.

Some Iranian women have been posting the pictures and footage to the Twitter account My Stealthy Freedom.

Being beaten up just for not wearing hijab!

The veil has been a mandatory dress requirement for women in Iran since 1979 after the Islamic Revolution. Iranian women are tired of this invasive and oppressive requirement, and one defiant campaigner insists in her video that women are “not puppets.” She says;

“Keep the desire for dignity, freedom, love and hope for all Iranian women. Iranian women deserve the best! Iranian women are not your puppets to do whatever you wish with them; to forcefully bully them, kick them out of stadiums, or forcibly make them wear Hijab.”

There have been numerous arrests of women who have removed the Hijab, which illustrates the oppression that women face when attempting to speak out against the despotic regime. A recent example of this was the arrest of the Iranian human rights lawyer Nasrin Sotodueh, after she had spoken out publicly against the Iranian Bar Association.

Iranian women are openly challenging the law which enforces the wearing of the Hijab, a law that they consider to be outdated and akin to slavery. Slavery was once legal in many other contries but it was an unjust law, and through mighty effort and sacrifice from many people the law was eventually changed. The enforcing of wearing the Hijab and its flow on effects is also an unjust law, which causes suffering to many young girls and women. Iranian women who have removed their Hijab in public have been subjected to verbal abuse, arrests, acid attacks and physical attacks, hence why the My Camera Is My Weapon movement has started, recording the harsh treatment they have been and are constantly subjected to daily.

It is ironic on one hand that we have women such as these true Iranian feminists fighting (literally with the fear of physical retribution) to have the Hijab removed, and then on the other end of the spectrum, we have government officials such as Australia’s Foreign Minister Julie Bishop who opted to wear the headscarf out of ‘respect’, (excuse me whilst I choke on her disrespect to Iranian women), when she visited these dictatorial countries. This shows a true disconnect between visitors from Western countries who adorn themselves with the Hijab to appease the regime, and the brave women who suffer under the oppression of this garment. I believe the comment that accompanied the picture on social media of Bishop wearing a headscarf whilst visiting Iran articulately and succinctly sums up many people’s thoughts:

“Fortunate there are still women who dare to stand by the freedom of women and fight back, unlike Julie Bishop”. 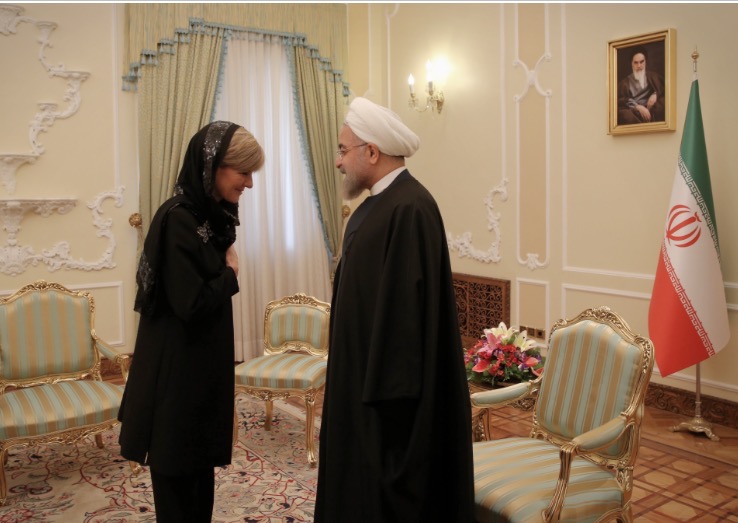 With countries such as Italy, France, Germany, Bulgaria and China to name but a few, who have either totally banned or partially banned the Burqa and face coverings, it is ironic that other non-Islamic countries are crying the loudest to prevent the banning of the Burqa and are using freedom of religion as the basis for this. Even more so since the wearing of the Burqa is not a religious requirement but rather has morphed into a cultural norm.

This then begs the question; whose cultural norm? For it is not the cultural norm in Western and European countries, who do not permit your face to be covered, due to the issues this poses with the identification of a person.

Let me pose a question; who are the real feminists here? Those women who put themselves at risk, daily fighting for their right to have the choice to remove their headscarf, such as the women in Iran? Or are the true feminists those women in democratic countries who are abusing freedom of religion and using that as the basis to enable the wearing of the Burqa by name calling, bigotry and Islamophobia. It is the women in Iran, who are fighting for their right to choose how they dress, who are the real feminists.

Coming from a Muslim such as myself, the headscarf is a choice between each woman and God, and not forced onto them by male dictatorship against their will. Shame on you Iran.