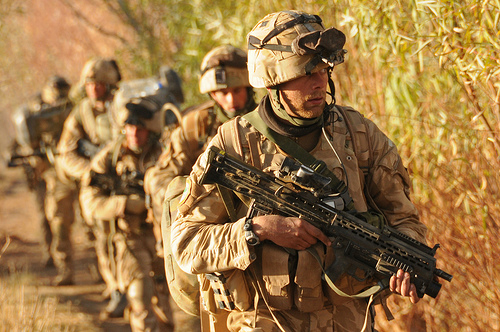 There has been some stir in the media of late in relation to alleged war crimes committed by Australian Special Forces in Afghanistan, and much like the claims of those who reduced our nation’s bravest to ‘baby killers’ during the Vietnam conflict, these claims along with the accusers must be vigorously cross-examined in order to bring about a just result. A just result being, convictions and sentencing where absolutely necessary and the exposure of the ill intent of those who so scrupulously seek to find a culture of wrong-doing within our fighting forces.

Let us not however lose focus on the severity of the accusations, as one of the most admirable characteristics of Western Civilization is our ability to self-reflect, self-critique and take action to correct our wrong doings. As noted by Dr Bella d’Abrera of the Institute of Public Affairs, “Western Civilisation is unique because it acknowledges rather than ignores its own “turpitude” and learns, or at least endeavours to learn from it”. But we need to also understand that such self-critiquing tendencies leave us wide open to the exploitation of groups and individuals with ill intent.

Some of the allegations levelled at Australian Special Forces in Afghanistan have included the alleged 2012 cover-up of the killing of an unarmed boy named Khan Mohammad, the killing of an Afghan businessman where it is alleged that a weapon was placed on the body post-kill, and the killing of one Bismilah Asadi and his son Sadiqullah during a raid in Oruzgan province. Though it’s painful to state, and difficult to comprehend such a level of wrong doing, if the charges are found to be substantial by means of due process conducted by level headed investigators, then we must lay the blame where it belongs and convict the men responsible for the crimes. This needs to be dome as a matter of principle, and if for no other reason than to discourage unnecessary acts of violence in the future. Though our forces fight some of the foulest entities that mankind could spew forth, we don’t want our nation’s defenders to slip into the abyss of bloodlust and unnecessary carnage as that has the flow on effect of degrading everything we stand for in the West.

In order to get a full picture of the complexities of combat in Afghanistan, the fog of war and the difficulties that those outside of the profession of arms have in passing judgement, it’s fitting to consider the case of a British Royal Marine of 42 Commando who was convicted and jailed for the 2011 killing of an unarmed Taliban fighter in Helmand province, which was caught on helmet camera by another Royal Marine. In 2013 SGT Alexander Blackman was convicted of murder by court martial and sentenced to life in prison for his actions, the first of its kind since the Second World War. The court watched the footage of SGT Blackman as he pointed his 9mm pistol at the unarmed insurgent and proclaimed: “Shuffle off this mortal coil you c**t. It’s nothing you wouldn’t do to us”.

In September 2015 The Independent released an article on this incident which described how ‘In the aftermath of the incident at a British outpost in Helmand, the Navy, which oversees the Royal Marines, commissioned a 50-page report on “the events ancillary to the murder of an unknown insurgent in the Nad-e Ali North district”’. This document, known as ‘Telemeter’, was exclusively kept by senior members of the Ministry of Defence and was only released in September 2015 and then provided to SGT Blackman’s defence team. The report detailed serious issues that were never disclosed during the court martial, and subsequently needed to be brought to light as part of a review of the case. In early 2017 SGT Blackman was acquitted of murder, and convicted of the lesser charge of manslaughter and set to be released shortly thereafter due to time already served. At this time the BBC summarised the London court’s findings into the matter by reporting the judge’s comments, that:

Blackman had more than 13 years of service and had previously been deployed to Iraq on three occasions and to Afghanistan in 2007”.

To paint a slightly clearer picture, SGT Blackman was an exceptional soldier in a highly specialised unit, tasked with extraordinarily belligerent operations against the most dangerous and determine enemies. He had been previously diagnosed with suffering PTSD from previous operational tours and – as the Telemeter report found – his chain of command had insisted that a particularly aggressive offensive must be mounted against the Taliban during his 2011 operational deployment. This aggressive offensive took place in one of the deadliest places on earth, where the Taliban have been a sternly governing force for some time with far better fighting skill, organisation and funding than those from other provinces. It was also stated in the court proceedings that he believed the insurgent to be already dead and that he was merely taking out a vengeful attack on a corpse which may seem unlikely given his statements, but when considering all of the other factors, and the fog of war, it’s not something that can be ruled out entirely.

Given all of this, it’s easy to see how the allegations made against Australian Special Forces serving in Afghanistan can be viewed in a particularly negative light, and while we can never shy away from the need to examine wrong-doing, there’s an urgent need to understand the limits of our understanding and ensure that all of the facts are presented adequately. Even those on the seven member strong court martial that convicted SGT Blackman to a life in prison didn’t possess all of the information required to pass a reasonable assessment of his character, or of the intricate details of the operational tempo and environment. How are we now expected to trust the judgement of a Feminist-Sociologist whose life work focuses on a relentless pursuit of misconduct in the military?

In short, we cannot.

There needs to be a particularly high emphasis put on finding the right people to pass judgement on this issue, and therefore such an investigation can do without senior officials who don’t understand the culture of our warrior class, cannot stomach ‘death symbols’ worn by our warrior class or believe that the use of the word ‘guys’ constitutes some kind of crime against humanity.

This may prove exceptionally difficult in our current political climate.