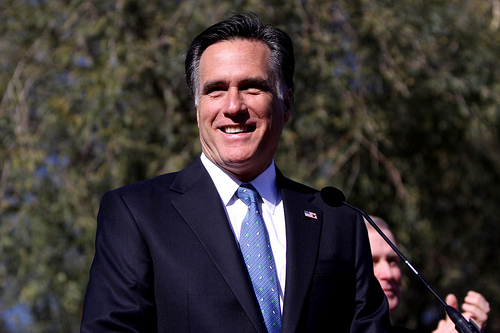 Expect former Presidential challenger, Mitt Romney to announce soon that he will run for the US Senate in Utah, in 2018. Long serving Republican senator, Orrin Hatch (83) will step down, in November, after seven terms, and the former GOP presidential challenger will be a shoo-in, if he wants the job.  [Editor: There is also speculation he would challenge Donald Trump for the 2020 GOP nomination for President.]

Prior to winning the Massachusetts governor’s race Romney ran for the Senate, unsuccessfully, in that liberal Democratic state, against Teddy Kennedy. He was also the man who saved the 2002 Winter Olympics, in Utah, from going belly-up financially and he has been one of the most decent Americans in public life.

Romney’s strength of character can in fact be deduced, and contrasted, by some of his critics in the ‘lamestream’ media.

Amy Davidson, writing in the New Yorker, was typical of that pack. She sneeringly dismissed Romney’s statements about having ‘binders full’ of qualified women who would be able to serve in a Romney Administration, and then moved to abortion, the idee fixe of feminists. Davidson thundered that if it hadn’t been for Roe v Wade then many women would have wandered the streets and some of them would have died. Her piece de resistance came at the close; “Would Romney have led a search party for them?”

This was a cheap shot at Romney who remarkably went searching for the kidnapped 14 year old daughter of one of his business partners, in a superb display of compassion and determination. The distraught father, Robert Gay, has no idea where she was after her disappearance from a rave party, three days earlier, in New York City, in July 1996. Romney took immediate action. He closed down the entire firm and asked all 30 partners and employees to fly to NYC to help find Gay’s daughter. The employees scoured NY talking to prostitutes, drug addicts, indeed anyone they thought might have information. A phone lead, traced by police, led to her discovery in a New Jersey basement, suffering from withdrawal symptoms. She probably would not have survived another day.

Nor was this a one-off act of concern.

Two years earlier when Romney was campaigning (unsuccessfully) against Senator Ted Kennedy, he discovered that a Veterans’ hospital badly needed milk. Being a bit gauche, politically, Romney suggested they learn to milk a cow! Having checked out the Veterans’ hospital Romney apologised for the flippant remark and then did something else, covertly arranging milk supplies for the next two years. The hospital tried to find out who their benefactor was but it was only when the milkman retired some years later that he spilled the beans…or perhaps the milk, in this case, as to whom epitomised the milk of human kindness.

In 1979, as 14 year old David Oparowski lay dying, Mitt and one of his sons, Tagg, were frequent visitors to the hospital. Indeed, Romney helped the young boy draft a will so he could leave his cherished possessions to members of his family.

“You cannot measure a man’s character based on words he utters before adoring crowds at happier times. The true measure of a man is revealed in times of trouble, the quiet hospital room of a dying boy with no cameras and no reporters – that is the time to make an assessment.”

That powerful statement by a father contrasts with the mean-mindedness of Romney’s critics with arguably the worst effort coming from an Australian hack. Canberra journalist Robert Macklin’s effort, in the 2012 US presidential race, would certainly be a worthy winner of the War of Jenkins Year award. According to Macklin, Romney, a Mormon, once drove to Canada on a family holiday with his dog strapped on the roof of a car.

Golly, gosh what a revelation and only 28 years after it happened!

Actually, what Romney did was to build a rooftop carrier, complete with shield, to make the journey of the much loved family canine more comfortable. Macklin’s ‘scoop,’ apart from qualifying to be in Evelyn’s Waugh’s manic novel of the same name, in fact belongs in the communication era of colonial America.

American history aficionados may recall the length of time taken between incident and response time in the War of Jenkins Ear.

In April 1731 a Spanish coast guard sloop intercepted a British merchant ship and the Spaniards boarded that ship. Heated words ensued between the two captains resulting in the Spaniard, Juan de Leon Fandino slicing off one of Robert Jenkins ears. Seven years later, March 1738, Captain Jenkins reported this incident to a committee of the House of Commons and the British saw that as a reason to declare war – in October 1739.

That cynical delay in an era of slow communications was one thing; Macklin’s 28 year wait to pontificate that Romney was unsuitable to be the US president in 2012, based on false claims, was simply in a class of its own! Maybe the Canberra hack has lived in the Australian ‘bush ‘capital for too long and has forgotten that many dogs in both Australia and the US ride on the back of truck and utes all the time – without seat belts too! (Hold the front page).

This pathetic media behaviour was similiar to the flak Romney gained at home for using his business acumen to save the Utah Winter Olympics. A group called PETA (People for Ethical Treatment of Animals) protested about Romney arguing for a rodeo at the Games and also that he had gone quail hunting. (The latter referred to the succulent bird, not former VP Dan Quayle – only another former VP, Dick Cheney, is allowed to hunt humans!)

Romney is also a long term giver, his contributions to charity exceeding his hefty taxation payments. In the past two years he has paid almost five million dollars in tax and seven million dollars to charity. Romney’s innate decency was also reflected in the last days of the 2012 Presidential campaign.

Obama thundered at the people not to boo Romney but rather take their revenge at the polls. Romney simply replied it was incumbent for people to vote for love of country, not out of revenge. Romney was defeated in that election but the real loser was America.