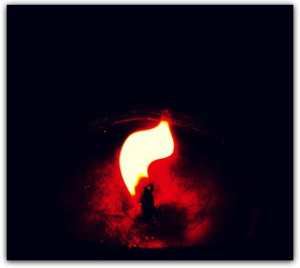 The general reasoning against any sizeable interest in the suffering and pain of Germans in World War Two might go along these lines:

“Well, the fact that some Germans suffered horribly doesn’t equal the unnecessary loss and pain their country caused to the Jewish people or the Allies.”

For obvious reasons, this response isn’t without justification.

However, any discussion about German suffering is avoided with the vigour of a young theologian whom, once confronted with the task of unpacking Karl Barth’s complex rejection of natural theology, quietly sums it up, then stamps it with a Dante-esque ‘abandon all hope – ye who enter here!’

The conversation moves on and the issue is conveniently ignored.

So it is with some difficult primary documents.

They are politely ignored or misappropriated in haste. Sometimes dangerously decontextualised in an attempt to bring the past into agreement with the present [i]. In this case the intellectual method is betrayed and history is abandoned, either in favour of an ultra-conservative or progressive party-line. Primary documents are for a time effectively written off, partially discounted, misused or conveniently ignored.

The victim? A warts-and-all linear view of history.

Read and received rightly, primary sources show us exactly where, how and when the past can read and inform the present.

Such an undertaking allows us to carefully acknowledge the past with all the seriousness and respect that it rightly deserves.

If allowed to speak as it is, what a primary source can teach us is invaluable. Their contents will challenge comfortable opinions by dragging us into the context, sometimes even becoming a contradiction to the self-serving and selective views of history so endemic of our time.

For example: Not all Germans were National Socialists. Some even paid the high price of active resistance.

It’s a rare occurrence for those in the English-speaking world to be granted a first-hand insight into the pain, suffering and thoughts of those few Germans who went against the stream during World War Two. Their voice is smothered by the fog of war and their sacrifice forgotten, so when we get the chance to read about it, it’s worth every penny.

Christian Puritz’s 2013 book, Christ or Hitler?: Stories from my life and times, by Pastor Wilhelm Busch is anexample of such rarities:

Busch’s recount of what resistance was like and what it cost is described by him in his diary:

“When my son reached the senior classes in the grammar school he himself wanted to resist the ungodly repression of those days.

“He chose his friends from the Bible Circle that I was leading. This work had already been so defamed that only a handful of young people had the courage to swim against the tide and keep coming.

“His friends decided one day to disobey the command of the Hitler Youth (to which all young people without exception then had to belong) to assemble on Sundays during the time of the church service. (Church Youth Groups were forbidden by the Gestapo, the Secret State Police)

“I never commanded my son to enter my youth work; he just grew into it of his own accord.

“My boy decided to do a bicycle tour. He invited his friends. And in the end he said it would be nice if his father came as well…

“On one of the tours we made a discovery that shocked us. My boy had a nose bleed which just would not stop. We took him to a hospital and eventually were told: “This boy has haemophilia; his blood can’t coagulate.”

“And yet later they conscripted him for the war in Russia. I ran to see the army doctor who examined him.

“But a pastor who belonged to the ‘Confessing Church’ and who was not ‘standing without reserve behind our beloved Führer’ did not get a hearing.

“I can still see the little troop standing on the station. Destination Russia!

“They were just children, eighteen years old. I could have screamed when I saw my child marching away, looking so pale. What did this tender artistic soul have to do with an unjust war? He had been caught in a pitiless machine.

“Then somewhere in Russia he bled to death. Abandoned and alone! No! Not alone! In his wallet was found a bloodstained scrap of paper with the words:

“The Lord is my Shepherd; I shall not want… And though I walk in the dark valley, I fear no evil; for you are with me.” [ii]

It’s true enough that when compared to the suffering of millions under the Nazi reign of terror, this is of little consolation.

However, there is a uniqueness within these first-hand accounts. There is a solidarity of suffering which shows a different side to Germany during World War Two. By their resistance to National Socialist rules, they become an exception to the rule.

Not all Germans were Nazis. There wasn’t a total alignment of Germans towards the totalitarian Fascist state.

This kind of insight is also reflected through the lives of German men and women, such as: Dietrich Bonhoeffer (Theologian), Oskar Schindler (Industrialist), Paul Schneider (Pastor), Claus von Stauffenberg (Soldier), Edith Stein (Feminist/Carmelite Nun), and Sophia Scholl (Student). {Oskar Schindler being the only one on this list to not be murdered by the Fascist State.}

In these cases and the few like them, there is a juxtaposition of those inside the Axis with those outside it.

In their resistance we witness a politics of realignment; the unavoidable and political ”nein” to any state, political party, ideology or politician who lays claim to being a secondary messiah equal to that of the revelation of God in Jesus Christ.

We are reminded by them that in Jesus Christ we are turned back towards freedom. In their struggle we are handed the reminder that we may stand, must stand and therefore ought to stand against any stream, scheme or masked revelation that seeks to ‘tame and control the Gospel by adapting it rather than being adapted by it’. (Karl Barth CD.II/I:163)

In 1969, Billy Graham talking with William F. Buckley Jnr. outlined the finer points of dichotomy between the Christian revolution of the heart and all Marxism revolt. 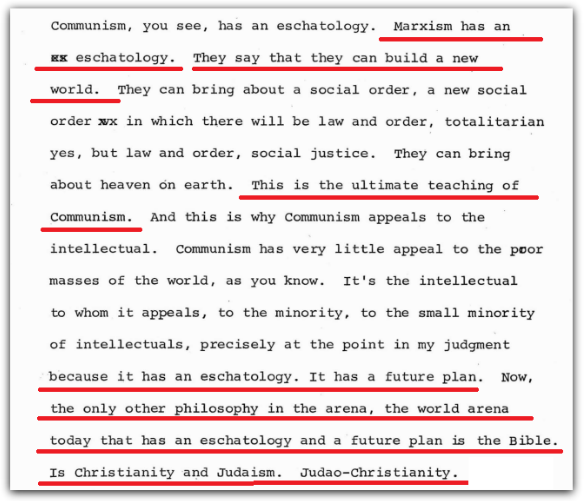 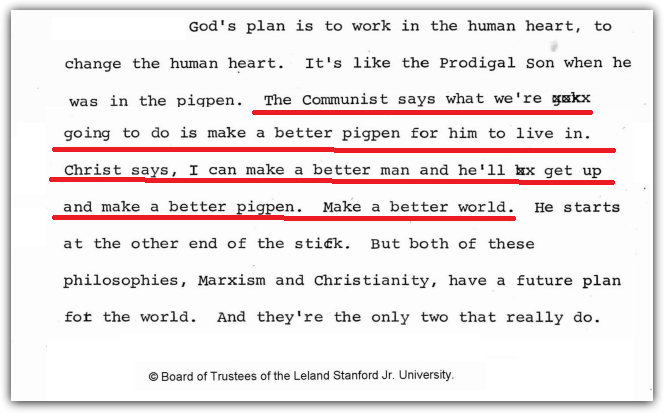 Under Marxist rule the first victim is religious freedom. By their very existence the genuine Christian, the sinner saved by grace, stands in direct opposition to Communism, because society’s salvation, criticism and hope begins and ends with the freedom and authority of Jesus Christ, not Karl Marx.

The Polish people exemplified this in the early 1980’s when “their hostility towards Communism was demonstrated, not by riots, but by openly showing their allegiance to God…” [iii]

This pertains to the pursuit of truth vs. political conformity, where the freedom that gives life to the intellectual method is maintained against any who would seek to enslave it.

…”the light of eternity shines into the sadness.” (Pastor Busch) [iv]

Stanford Transcript: The Decline of Christianity