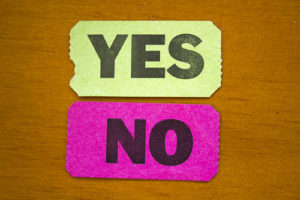 Over dinner recently, the conversation turned to the topic of SSM, and why in spite of not being homophobic or bigoted I would vote No. My wife listened and wisely asked for some facts. So let me boil down the discussion to the most salient points in the hope that you may understand the topic from a new angle.

Q. What is the actual wording of the “Australian Marriage Law Postal Survey”?

A. Should the law be changed to allow same-sex couples to marry?

So from this it seems quite clear – and the idealistic, emotive response is a clear Yes. However, I pressed on with another point – which was not so clear – my asking the question “What does “same-sex” mean, according to the Australian Human Rights Commission?”

Q. What is ambiguous about the term “sex” in the context of “same-sex”, and potential legislation changes?

“Sex: The term ‘sex’ refers to a person’s biological characteristics. A person’s sex is usually described as being male or female. Some people may not be exclusively male or female (the term ‘intersex’ is explained below). Some people identify as neither male nor female.

“Gender: The term ‘gender’ refers to the way in which a person indentifies or expresses their masculine or feminine characteristics. Gender is generally understood as a social and cultural construction. A person’s gender identity or gender expression is not always exclusively male or female and may or may not correspond to their sex.

“This report also frequently uses the phrase ‘sex and/or gender identity’. This term is used to refer to the whole spectrum of sex and/or gender in our community. It aims to include all people regardless of whether they identify within or outside of the binary gender framework.”

What does this mean? It means that the outcome that people like me emotionally and idealistically support a Yes vote for, namely supporting people in long-term, committed relationships who have the same biological “sex”, is at risk of being hijacked, to be interpreted as wide-ranging legislative changes for “gender identity”.

Q. What the hell does that mean?

A. For real world outcomes that I would vote No for, look to this example from California.

“Existing law prohibits public schools from discriminating on the basis of specified characteristics, including gender, gender identity, and gender expression, and specifies various statements of legislative intent and the policies of the state in that regard. Existing law requires that participation in a particular physical education activity or sport, if required of pupils of one sex, be available to pupils of each sex. This bill would require that a pupil be permitted to participate in sex-segregated school programs, activities, including athletic teams and competitions, and use facilities consistent with his or her gender identity, irrespective of the gender listed on the pupil’s records.”

I propose we interpret the topic, and support the dinner table discussion to be framed as this:

In short, my concern is less about maintaining the sanctity of marriage and more about maintaining the common sense legal definition of biological gender. The “progressive” instinct is to do away with foundational beliefs such as marital union between the biological male and female. Real world experience has shown that this is soon followed by the legislative redundancy of biological sex, in favor of gender identity. As a libertarian I really do not seek to impose restrictions on the romantic activity of consenting adults, nor how they perceive their identity. I do hold significant opposition toward legislative changes which enshrine gender identity in lieu of biological gender. Because the SSM postal vote is a clear precursor toward implementing gender identity-based legislation, I would encourage readers to vote No.