I said in my post yesterday that we would see the actions of the alt-right twisted, turned, and completely misrepresented by conservatives within a week. I was being generous as of course it all happened within less than a day. The normies are falling over themselves to disavow the alt-right by labeling them either as Nazis, (isn’t everyone a Nazi these days?) or as being the same as the far-left; two opposing peas in the same pod, (yes, Brendan O’Neill is a moron).

As far as the Nazi LARPers are concerned, they’re obviously epic droolers who are out there where the trains don’t run. Dressing up as Nazis isn’t edgy; it’s just bottom-feeder level stupid, and if these dimwits weren’t dressing up as Nazis they’d be dressing up as space robots or something. You don’t have to disavow people like this; you just tell them to fuck off and not come back again. It’s not hard, but somehow in the mix of being careful not to punch right, (which I agree with), this message got mixed up with don’t punch stupid.

Guys, you’re not going to want to have everyone on your team. Some people are such a liability that they’re not even useful as cannon fodder. Whoever it was that thought that having guys parading around toting Nazi flags was a good idea should be next given the responsibility in any future meetups of doing absolutely nothing at all. Stand over there in the corner, don’t say anything, and try not to breathe through your mouth.

What you’re not after when organizing stuff like this is compromise or consensus. You’re not there to make people happy. You’re there to make a statement, and as such the core leadership must have a very clear idea of what the objectives are in that regard. Looking at what happened in Charlottseville, it appears that the core objectives were most probably reached with the brilliant torch-lit march on the Friday evening. The cops weren’t expecting it, the city wasn’t expecting it, and the Antifa goons were all probably out singing Kumbaya or making crappy porn videos. It was classic diversion tactics, only it wasn’t planned that way. But it got the job done, the alt-right looked brilliant, and if the leadership had had a bit more experience and some rock solid balls then they would have just sent everyone home after that.

I mean, how stupid would Antifa and the rest of the far-left idiots have looked if the alt right hadn’t turned up on the Saturday? It would have been beautiful.

That ability to think quickly on your feet and adapt to changing conditions can only come from experience, and it can only manifest itself when clear objectives have been set out from the beginning.

When I first read that the guy who organized this whole thing was someone who had literally come out of nowhere I was a little surprised. Who is this guy? It turns out he’s a past supporter of Obama and the Occupy movement, as recently as last November. 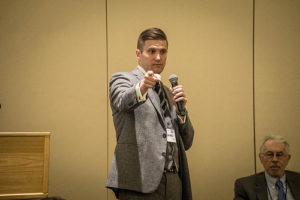 This is clearly an indictment of Richard Spencer, the guy who really truly wants to be a leader and who can’t help combing his hair like he’s about to audition for a starring role in the Beer Hall Putsch. Spencer wants to be a leader for the sake of being a leader, which is the last guy that you ever want doing the leading. Based on how events unfolded on the weekend, I doubt that he’d be capable of leading his finger up his own nose. His name was top billing, he keeps wanting to be the big man in town; fine, then it’s on him. He’s responsible for the fact that Nazi Larpers were marching on behalf of the alt-right.

In this Spencer has form. He managed to wiggle out of the bad publicity that surrounded a little speech he gave last year when a bunch of idiots starting giving the Hitler salute. But this second time fooling isn’t going to fly.

He’s also responsible for this nobody who organized the rally. Maybe someone should have been asking some hard questions, or doing a little bit of digging at the very least. Spencer probably wasn’t thinking of that. He was too busy trying to make sure that his name was on top of the billing and that he had packed enough hair gel for the weekend.

It’s a terrific paradox. Part of the reason that the alt right has been successful is because it has avoided having a clear leader for the media to focus on, a tactic that was undoubtedly influenced by GamerGate. And yet the entire time we have had little young Richard Spencer jumping madly up and down in a disjointed attempt to get his weaselly face on as many posters as possible.

The alt right needs leaders, but it needs leaders who are interested in furthering the cause of the alt right as opposed to their own lofty leadership, media, or political aspirations. It all also really needs guys who aren’t missing a whole bunch of tools from the tool shed. Smart people who are able to organize, inspire, and capitalize on sudden changes in events. You can write the bestest most wonderful plan of all time, but if things take an unexpected turn after the first five minutes then you have to prepared to throw the plan away and come up with something on the fly.

Police not letting you through and they’re trying to shut the whole thing down? Did you have this kinda obvious potential situation planned for or did you just think that it was all going to be peachy? And now that it’s not turning out to be peachy, what is the plan? And how are you going to communicate it to all your supporters there on the ground? What’s the extraction process? Do you have a fall-back location identified and a secondary option in case the first one doesn’t work out? Or are you just going to stand around and hit people with Nazi flags?

On the one hand I reckon that the alt right did good on the weekend. But they also did very badly too. If the plan is to be better next time then some people should just go quietly into that good night. Which is most probably not going to happen. Things never work out as planned.