So the other day I went to a restaurant in Brisbane with a couple mates. Turns out it was a Vegetarian restaurant. I thought, “That’s OK, I can deal with this.” So when I got there, all the food looked really good. Nothing looked bad. But I asked the waiter anyway, “Do you have any Chicken perhaps?” 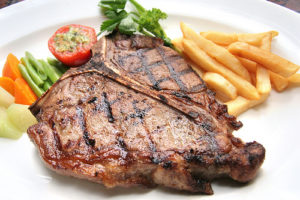 “No, none here, but I’m sure you’ll find something nice to eat!”

As I looked around there were about fifty people in the restaurant. I was the only carnivore, guess that meant I was about a 2% minority group here.

As I sat there, the food was delivered, and my two mates seemed to be enjoying it, but i was not happy, so I called the waiter back.

“Surely you must have some meat? Even a bit of seafood perhaps, that doesn’t count as Vegetarian does it?”

“Yes it does sorry, look you can go to any of the pubs down the road, or there are a few supposedly good restaurant’s up the road as well?”

I asked, “Who made these rules up? Who says you can’t have some chicken in vegetarian? You’re very behind the times, you need to be more inclusive of people who are not strict vegetarian or change the rules.”

She said, “I’m sorry, but the rules for vegetarian have been around for hundreds if not thousands of years. For many, this is a religious requirement and many believe it’s not right to kill animals for eating, so you can’t change the rules.”

Well that was it, I was going to show them! The next week I came back with a placard. Written on it was:

“Gastronomic Equality! We have the right to eat our food too! Don’t discriminate!”

The owner came out to see what the fuss was all about. I told him he needed to put some meat on his menu to be more inclusive of his customers, to recognise that some don’t hold his views that Vegetarian is exclusively made with vegetables or salad.

He said, “You can’t change the rules, this has been an institution for many many years, you can go and set up your own place and call it Meatorama or something, but we can’t change to suit you, the rules are the rules!”

I wouldn’t take no for an answer, so I designed a new colourful banner with vegetables and a chicken and fish which were approved as part of a vegetarian diet titled “Gastronomic Equality”. Some of my friends joined in, and they made banners and picketed with me to change the rules. We set up a Facebook page, and started to generate interest. These rules are outdated and exclude parts of society. It’s not fair, we want the rules changed. A newspaper picked up on our bizarre campaign, and then a TV station started to ask, why can’t they be more inclusive? But still the conservative vegetarians wouldn’t budge, saying they would NEVER change the rules.

So we wrote to our politicians requesting they change the rules. They said they didn’t make up these rules, you can eat what you want. But I wrote back and said this group was discriminating, and we can’t allow these rules in society. We need to have a vote as many now agreed with me.

But… then I realised, I would never succeed in changing their views. These rules belonged to Vegetarians, not me, it was their belief, and even if I managed to change the law, their rules, which were centuries old, would not change and neither would they, because they were totally committed to this strange concept which I couldn’t understand.

So I decided to set up my own institution, Carnivore Eaters INC: Bring back the T-Bone!!! Yeahhh!

Kinda funny when you think about it, what people believe.

Craig studied Engineering, played with aircraft and other defence-related stuff before getting bored and got some cows, horses and old cars. He still works unfortunately, but prefers to sit on the deck with his favourite wine and watch the farmers driving tractors round and round in the valley below, whilst trying to forget how the mainstream media is destroying the world.