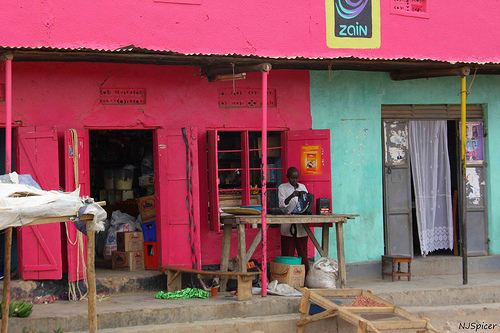 This article was originally published in 2016 at https://pushingrubberdownhill.com/, where Adam Piggott publishes regularly and brilliantly. You can purchase Adam’s books here.

There is a street of shops close to my house where I go to do the shopping. Outside the main supermarket on the narrow footpath is the preferred location for charities to set up their stand and solicit donations. Because of the nature of the road you are forced to walk very close to them, and thus the friendly demands for donations are difficult to avoid.

There must be an agreement within the charity world of who gets what day as there is only room for one small table. Every day there is a different charity. Perhaps it is disabled athletes who want to go to the Olympics, or this type of disease, or these underprivileged, or that poor animal that needs saving. It is a relentless barrage of manipulation by guilt and I am sick of it.

On Saturday the good wife and I walked past and I waved away the appeal to our hip pockets. We walked up the street only to find that the shop we were seeking was closed. So we walked back down the road towards the charity zone and the same individual who had accosted us not two minutes previously had a fresh go again. I couldn’t help myself and I gave him a quiet serve as to the inappropriateness of being constantly badgered for money until the good wife pulled me away. We spent the next half an hour continuously dodging that bloody table.

Charity organizations are simply a giant scam. They exist to provide well paying employment for charlatans who wish to hide behind a veneer of magnanimous smugness. Oh sure, the poor schmuck standing on the road is making bugger-all, but the people behind the scenes are making very hefty salaries indeed. World Vision in 2011 had revenue of $2.79 billion and 44,500 employees. How much of each dollar that you donate do you think ends up in the hands of those that supposedly need it most?

Mind you, at least World Vision has some pretense of doing the right thing. Here is a story from just six weeks ago detailing how a prominent Australian charity fell apart after requests for the barest of financial scrutiny revealed disturbing problems to say the least.

There are 56,000 non-profit organizations with tax-exempt status in Australia. No wonder they have a daily roster going on outside my local supermarket.

I became particularly suspicious of so-called charitable organizations after the time I spent living in Uganda. There I saw first hand the devastating economic effects that are a direct result of the aid industry. This was detailed in the book Dead Aid by Dambisa Moyo. I mean, who would have thought that donating ship loads of clothing to Africa would destroy the local textile industries? Surely they should have been able to compete with lots of free stuff. That’s how capitalism works, yeah?

Just before I arrived in Uganda some of my fellow guides attempted to improve a boat service that operated at the base of the Murchison Falls in the national park. The existing service was very badly operated so they formulated a business plan to improve it and help the locals, who understandably were very keen on the idea. It was a win-win for all concerned.

They got nowhere. Finally a local bureaucrat took pity on them over some drinks at a bar and explained how things actually operated. It turned out that the park received a yearly hit of foreign aid. That money passed through several offices of Ugandan officials and was steadily watered down before it found its way to the park. Whereby just enough remained to get the park through another year on a shoe-string budget.

The guides’ plan would have shown a healthy profit. But a healthy profit was anathema to foreign aid. If the park showed that it could operate at a profit then the aid would cease, and all those lovely kickbacks would disappear. The tainted money from foreign aid stunted economic opportunity and kept the locals in abject poverty.

In the past when hassled for a donation I used to reply that our family gives to one charity, which was a lie to get them off my back. Now I just tell them up front – I don’t give to charities.