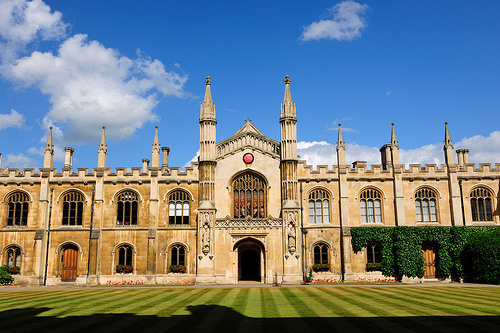 There are so many trending stories of anarchist insanity from undisciplined students on college campuses that it almost seems to fade into the background, like a white buzzing noise. Kind of like, oh, I don’t know, Islamic terrorist attacks?

But this piece over at Powerline Blog got me thinking about the nature of what is happening on campuses. Specifically this quote within a quote:

“A few students discovered that pompous teachers who catechized them about academic freedom could, with a little shove, be made into dancing bears.”

If adult professors are so easily manipulated into debasing themselves in this way by what are essentially immature children in young adult bodies, what does this say about the quality of the information that they are teaching? If they are unable to show any moral or intellectual backbone in an actual ideological confrontation then it’s not much of a jump to assume that the classes they teach are similarly lacking in rigorous content.

Someone who is morally weak is not only by default not a good teacher; they also lack any real knowledge to impart as they have spent their own life avoiding the types of personal challenges and crises that necessitate personal maturation. They might be able to recite words from a book, but they will not be able to frame them with any real life meaning.

This should be no surprise. One only has to glance at the professional track that a tenured professor needs to take to reach their status to understand that they will have spent their entire professional life inside the walls of an academic institution. Thus when a professor with actual real world experience such as Jordan Peterson comes along, suddenly he stands out, not just for his abilities but for the sheer lack of any competition among his peers.

Universities are no longer institutions of higher learning; they are businesses, and their product is the degree that students receive on graduation. The value of a degree is dependent on a few factors; the number of degrees in relation to the number of jobs available; the quality of the candidates that apply for jobs with the degree as a qualification; and the quality of the teaching provided by the institution that issued the degree.

It has long been recognized in the general workplace that the vast majority of skills needed by new employees will be learned on the job itself. University was traditionally a method for the elite of society to network and form contacts that could then be used in professional life. In addition to this was the focus on developing one’s personal maturity, which usually comes as a direct result from encountering a mentor like professor Peterson and discovering that everything that you think you know is shit.

But that isn’t happening on today’s campuses. The students themselves are telling the professors that everything that they know is shit. And they’re right. The problem is that the students are also full of shit. It’s a good old fashioned shit sandwich.

Undoubtedly there are a number of students on campus who are not behaving in this way. But surely they must be able to observe what is happening and come to the conclusion that their professors are weak cowards with nothing of value to impart. More importantly, how can they not understand that they will be receiving the exact same degrees as the little Fascists who are holding colleges to ransom?

Over the years there have been many instances of people lying on their CV by including fake degrees and qualifications. But perhaps a time is coming where people will lie by omission. In other words, they will neglect to mention that they hold a degree because having one will be the mark of a sucker.

Myself, if I were a student on campus at this point in time, I would probably quit and demand a refund. Or better yet, don’t go in the first place. Simply because the product on offer has next to no value. The only thing keeping the whole show going is the exorbitant cost of degrees. People assume that if something is expensive then it will be worth a lot of money.

But that’s a sucker play.