One striking memory of an SBS bulletin in recent years was an Australia Day when they dutifully reported on the festivities and formalities enjoyed by normal Australian, immediately followed by a report which breathlessly informed us that ‘an alternative view’ of Australia’s national day existed, to which they gave equal air-time. 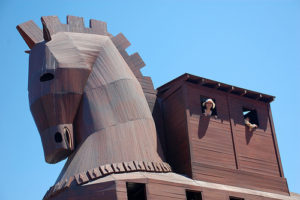 I have only two quibbles with the following quote by an anonymous reader: The SBS has been a Trojan Horse for many, many years; Jenny Brockie on Insight had been aiding and abbetting Islamic apologists long before ABC caught up with Q&A.

Secondly, there is no need to waste money on a Royal Commission. Defund both the ABC and SBS, or at the very least, send half of their budgets to The XYZ so we can present news and analysis just as far to the right as they are to the left, but without lying repeatedly that we are impartial:

“SBS has become in recent years a Trojan horse. What was once a useful resource for recent immigrants has morphed into a destructive, insidious propaganda weapon eroding the social fabric of Our Nation.

“It is hellbent on fostering division and discord. Consistently painting Anglo Australia as seething, vicious racists of heinous intent and fostering a mythical belief in an epidemic of widespread “Aussie Racism”.

“The Board needs to be sacked and a Royal Commission into the subversion and promulgation of hatred against “White Australia” be openly examined for both SBS and the ABC and the treacherous aliens exposed and ejected.”

And salt the earth.