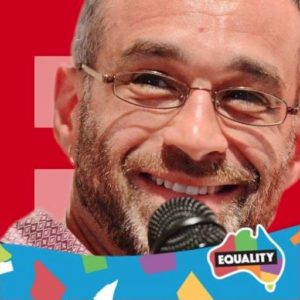 Let’s make one thing clear of what I think of gay rights activist Michael Barnett. He is a bullying, totalitarian little thug on a power trip, and those are his positive qualities. Fresh from his victory over making Coopers brewery grovel in public before the altar of gay militancy, he is now going after Christian charities via their public board members. Did I say public? Silly me. Christians need to cower behind closed doors these days from those poor put-upon homosexuals. You know, the ones who just wanted to be free to love each other and have the equalities?

“The Australian Charities and Not-for-profits Commission yesterday agreed to keep the boards of the Lachlan Macquarie Institute and the Australian Christian Lobby off the public record ­because publication ‘could ­endanger public safety’.”

It might be a little too late, seeing as Mr Barnett has posted the board members’ names on his website. One would then presume that Mr Barnett intends to endanger public safety, or at least the public safety of conservative Christians. Incidentally, that car bombing of the Australian Christian Lobby’s Canberra office last December and the death threats against the staff members sure has dropped off the media radar, hasn’t it. I wonder why that is?

Today we are finally seeing some push-back from Australian Church leaders on this matter. But is it too late for them to discover a spine?

“The nation’s most senior Christian leaders have described as ‘appalling’ and ‘unAustralian’ attacks from gay activists that have driven two Christian charities to request board secrecy.

“And the Sydney Anglican Archbishop Glenn Davies has slammed the multinational corporates who surrender to those ­attacks as ‘weak-kneed’.”

That’s nice and all, but this is from the same Anglican church that hides its Melbourne cathedral behind an enormous banner declaring their support for refugees. The fact is that denominations everywhere have been pushing lefty causes for years. This was partly due to the little spot of bother they found themselves in when they tried to cover up the sexual molestation of children by some of their priests. Michael Barnett has something to say about that: 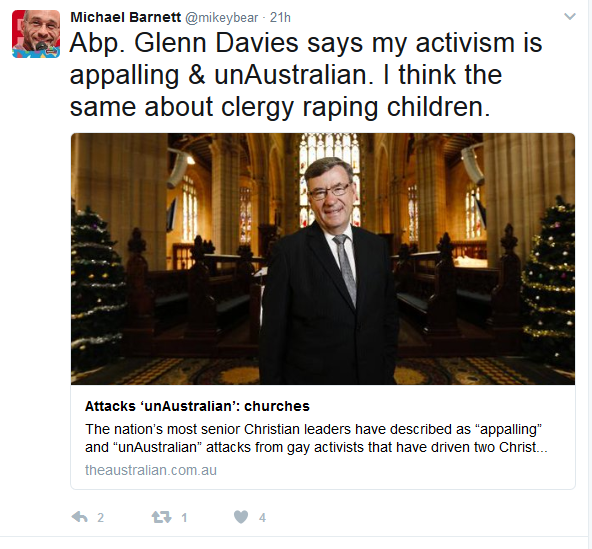 It’s curious, but as far as I am aware, these monstrous acts were perpetrated by homosexuals. The Church didn’t rape children. Homosexuals raped children on the Church’s watch. In fact, the Church never wanted homosexuals in their ranks in the first place, but bowed to public pressure and were forced to admit them back in the 1960s. That turned out well, didn’t it? I’m sure that the Boy Scouts are not going to regret bowing to similar public pressure which has resulted in them admitting homosexuals into their ranks as scout troop leaders. What could possibly happen when the boys go away for a camping weekend together? I mean, is there a precedent we could examine?

What better way to destroy an organization but to demand that you admit people like yourself to its ranks where there is a very high chance that they will perpetrate despicable acts, and then prosecute the organization after the fact, and led by the very same sorts of people who are prone to these acts in the first place. I mean, it’s pure evil genius.

I suppose the next step would be to legalize gay marriage and let the gays adopt little boys into their household. What could possibly happen? But I’m sure people like Michael Barnett are just really nice and loving. They don’t wish to push their private sexual preferences on anyone else, surely. 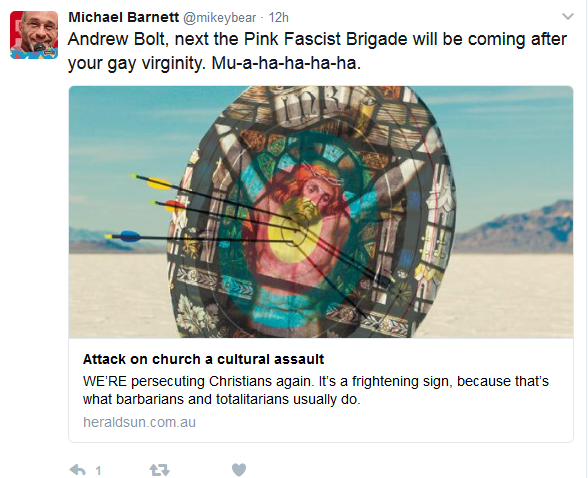 So let me get this straight, Michael. Are you threatening to gang-rape Andrew Bolt for criticizing your militant agenda? If not, what exactly do you mean by this tweet?

Michael Barnett is a bully and prone to harassment, but he is able to do this because the powers at be have rolled over once too often. If churches want to get people back into their congregations, then they need to drop the lefty preaching quick-smart. The only way to combat these cultural Marxist ideologues is to fight back twice as hard. You don’t get anywhere by attempting to appease them. Appeasement only encourages them to even greater heights of bullying. And activists like Michael Barnett have no end game. Their existence depends on their advocacy.

Tolerance is no Virtue 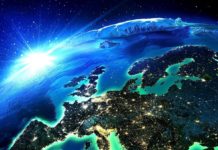 The United Ethnostates Of Nordland