Writing in The Australian, Robert Gottliebsen attempts to make the claim that the CEO of Australia Post is not overpaid. Currently the CEO, Ahmed Fahour, is the highest-paid public servant in Australia and the highest-paid national post service CEO in the entire world. He commands an annual salary of $5.6 million.

“The world’s parcel express transport giants such as DHL, FedEx and the Japan Post-owned Toll must have been chuckling with joy at the controversy over the salary of Ahmed Fahour.

“From the Prime Minster down, Australians have compared Fahour’s job as chief executive of Australia Post with similar post office executives around the world. It’s absolutely the wrong comparison because Fahour is also heading a parcel express transport business that competes with the global majors. And he is winning!” 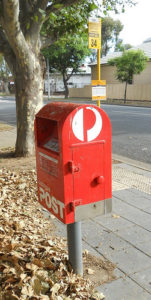 Gottliebsen’s entire premise is founded on the assumption that it is the role of government to compete with private businesses. This is patently untrue. The role of government is to provide services which private enterprise is incapable of providing. It is not the role of government to utilize money that has been taken by taxpayers to prop up a service that has been rendered obsolete by the rise of more efficient private competitors, let alone squander such funds on immense personal salaries for high level executives. Why on earth the Australian government has decided that it needs a “parcel express transport business” is beyond me. Next they’ll be deciding that they need to enter the internet telecommunications field.

The other porky uttered by Gottliebsen in his meandering screed is the hilarious claim that Australia Post not only competes against the international giants but that it is winning. Any poor schmuck who has had the total displeasure of utilizing Australia Post’s services knows that he will be overcharged, his parcel will take much longer to arrive at its destination, and if it gets lost on the way, which is an increasingly likely outcome, he will have no recourse available to him.

“Fahour went to Australia Post because he saw the potential to dominate the parcel business and develop an enormous government-owned business — a task few people in Australia have achieved against international competition and one that is rare in the world.”

That was in 2008. The correct response to the rise of private enterprise that was effectively competing with an outdated government institution would have been to privatize it or close it down. But instead the government threw huge amounts of taxpayers’ money at the edifice. And what has been the end result?

“Poor old Japan Post paid $6.5bn for Toll partly in the belief that public servant Fahour would be a push over. Now Japan Post has changed Toll’s CEO and is about to embark on massive retrenchments. In fairness, Toll’s problems also reflect the international business.”

Massive retrenchments? You don’t say. So let me get this straight – the Australian government has utilized a huge amount of taxpayers’ money to compete against private enterprise, with the end result being that a massive number of job losses are predicted. Job losses in the private sector. Jobs that were paying the tax that enabled the Australian government to compete against them in the first place. Jobs that will no longer pay any tax in the future.

The Australian government has used money taken from Australians to effectively drive them out of their own jobs. That this is allowed to happen is simply criminal. That Robert Gottliebsen, writing for the apparently conservative newspaper The Australian, thinks that this is a matter to be celebrated is a disgrace.