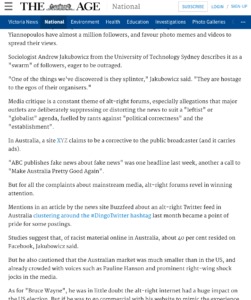 Editor’s note: Today, the hundreds of readers of The Age were treated to a sloppily patched-together article on “alt- right” media in Australia. It follows a slightly boring pattern of mainstream media sites desperately trying to catch up, after being repeatedly dakked over the results of Brexit and the Australian and US elections. Passing reference was made to The XYZ, in which a lazy editor forgot to highlight our full title when creating a hyperlink. Ironically, given that one of the key critiques of alternative or tabloid media (or fake news, as per the new terminology) is that people read just the headline or the short summary, and get a misleading idea regarding the actual story, the Age chose merely to mention a few XYZ headlines. If they had bothered to dig a little deeper, they could have discovered such gems as “The moment I stopped caring about racism” or “It’s all true: XYZ is run by Jews.” We’ll leave the rest to Eh?nonymous:

Well, it seems that XYZ has arrived. We are apparently insignificant and ‘fake news’, yet inexplicably still warrant a mention in The Age.

As you can imagine, the contradictory nature of this article has us giggling like schoolgirls, in much the same way that Milo did when Hillary completely discredited herself by devoting important pre-electoral press conference time to talking about some of his more outlandish headlines, and reading them aloud to millions, much to the delight and empowerment of every troll that ever shared a Pepe meme.

The Age is apparently so lacking in self-awareness that they don’t see any irony whatsoever in devoting half a page to a story about how insignificant and unimportant something is. If XYZ is, say… silliness, insignificance, and ‘fake news’, why would it warrant a mention at all? Why wouldn’t it be treated in the same manner as someone who had just contacted you to report a bunyip sighting? 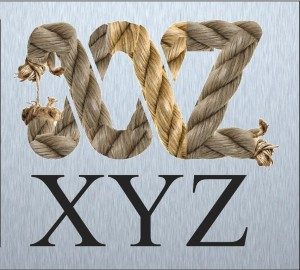 The Age article reads much like their early Brexit and Trump articles. Full of ridicule, derision, and a smug (wildly inaccurate) clairvoyance. And we all know how that ended up. If past trends are anything to go by, the Age may well be writing about their future competition, in ridiculing XYZ and the other alternate media sites that they profile in the article (that I and many others will be checking out… thanks Age).

At the end of the day, this article reads like a bloated, talentless, pre-fab mainstream musician scoffing at the ability of someone who can play four instruments and has the ability to write their own music, simply because they aren’t professional. XYZ more closely predicted and reported upon the Zeitgeist surrounding Brexit and the U.S. election than the Age ever did, right up until the eleventh hour.

Unlike mainstream media, our reporting had little to do with our preferred outcome or wishful thinking on our part. Unlike mainstream media, we listened to those who commented on our pieces. They were on the ground, and probably had an even better handle on what was happening than we did. We did not slander them as being ‘deplorable’ or ‘alt-right’ when they disagreed with us. We pondered what they had to say, and grew as one of the few truly independent voices in Australian journalism.

And that’s it in a nutshell. This article by the Age is a slowly boiling frog. When a media outlet is content to give a derogatory blanket description to any of their readers (and they have a lot, just check out their comments) as ‘Alt-right’ for simply questioning the validity of something in the article they’ve just read, that’s the only evidence you’ll ever need that these mainstream media have a vested interest in manipulating public opinion and quashing dissent.

These people are supposed to be on our side, holding the people who affect our lives to account. Somewhere along the way, they became political power brokers, lucrative P.R. firms. They were proven irrelevant by falling asleep at the wheel of several major news stories. And they have the audacity to moralise over those of us who do this for little or no money. In closing from all of us at XYZ, I’d like to thank the Age for all the extra traffic…