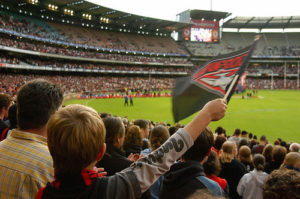 Australian Olympic gold medalist Nova Peris is reported to be ‘quite chuffed’ by the overwhelmingly positive response to reports that she may be considering leaving her role as Federal Labor Senator for the Northern Territory to launch a career with the AFL. Peris was parachuted in to replace long time Labor Senator Trish Crossin by former Labor Prime Minister Julia Gillard before the 2013 federal election. It is believed that, having served the party of the looting class for several years now, Peris is ‘looking forward to giving something back to the community.’

The Melbourne Football Club is believed to be the front runner to snap up the former athletics star. Already having the devastating talent of Australian cricketer Jessica Cameron, who kicked six goals against Brisbane last weekend, at their disposal, a spokesperson for the MFC said they are keen to get another ‘big name with a diverse sporting background on their list.’ Age is not considered to be a barrier to Peris – a great precedent was set when Bobby Simpson came out of retirement at the age of 41 to captain the Aussie Test side during the crisis caused by World Series Cricket in the late 70’s, and he could still see the cherry just as good as the young blokes.

The Melbourne spokesperson cautioned, however, that Peris would have to ‘earn her guernsey, just like everybody else.’ The spokesperson refused to speculate on XYZ questions regarding fears that Eddie McGuire is lobbying hard to get the star to Collingwood, plus reports that Sydney may be about to offer her a multi-million dollar long term deal.

Labor MP’s are believed to be ecstatic at the news. An unnamed source told The XYZ that given most Labor MP’s used to be either ALP staffers, union hacks, ABC journalists, or lawyers, many have been ‘triggered by having to work with someone who actually used to be good at something.’

Asked who was most likely to replace her, the source said the party would undergo a competitive process to find the best person for the job, irrespective of race, colour, creed, or the 365,000 possible genders. ‘In the Labor Party, you don’t just get a spot because of who you are. You have to earn it. That’s what diversity is all about.’