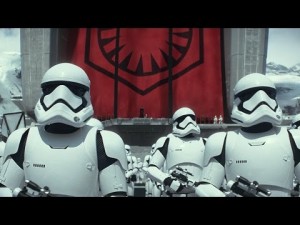 A host of (deliberately named) storm troopers, turn as one to face the camera. Behind them, three tall, red banners bearing a black, strident symbol drape down the facade of a fortress. The scene, reminiscent of a Nuremburg rally, fills barely a second’s worth of frames in the trailer for the new Star Wars movie, The Force Awakens, due out on December 17. But it is enough to convey a dark political undertone, and reflects the quite legitimate fear that fascism, and the horrors it brings, could return to the West, like an old nightmare come to life.

Depending on who you speak to, the original three Star Wars movies were analogies for the fight either against communism, or the fight for communism. I am for the former. The three prequels were less ambiguous, referencing the recurring historical trope of a democracy which descends into dictatorship, particularly the way in which the German Weimar Republic was subverted via its own democratic institutions – Emperor Palpatine exploits the fear of war, and then war, to gain power, extend his power, and eliminate all political opposition. Lucas’ progressivism infects the three prequels, in which he pushes the false narrative that George W Bush was himself a fascist, who used the War on Terror as a pretext to extend American power, even attempting a clumsy paraphrasing:

Anakin Skywalker: “If you’re not with me, you’re my enemy.”

Obi-Wan Kenobi: “Only a Sith deals in absolutes.”

(Moving on from the hypocrisy of Kenobi’s own absolutist statement,) this bias is indicative of the false narrative which afflicts much of our education system, our media, tv and film – the idea that the free market economy on which our political and economic system are built, and the way in which America has protected the free world in the years since World War 2, is itself fascist and exploitative; that the parties to the right, or to the more libertarian side, of our political systems, are fascist; that nationalism or patriotism to one’s country, or identifying oneself by one’s ethnically European or British heritage, is racist, or fascist.

But it is the free market, championed by the USA, which has brought freedom and prosperity to more people in the last 150 years than any other system; it was the Tory Margaret Thatcher and the Republican Ronald Reagan who had the courage to stand up to the totalitarian, Communist USSR, challenge it, and defeat it; and it was the patriotism and nationalism, the belief in the right to national independence, of the people of Europe, the United States, and the rest of the world, which gave them the strength to defeat the Axis powers in World War 2.

Interestingly, National Socialists themselves don’t appreciate being called NAZI’s – they consider it some kind of slur.. But this suits socialists for several reasons; it helps avoid the uncomfortable reality that Hitler was every bit a socialist (you can’t have national socialism without socialism); it helps them spread the false narrative that fascism, despite its strong, centralised state control over the economy and of people’s lives, is right-wing rather than left-wing; it helps skew the focus onto the racism of the Nazis as the cause of WW2, when in fact Russia joined Germany in September 1939 in invading Poland; and it helps obscure the fact that in the 20th century, communist/ socialist regimes murdered more people than the national socialists.

Now, the USA is vilified by the left, from its very founding as the dispossession of a people, rather than the creation of a democracy which welcomed the dispossessed from all over the world; for its exploitation of slavery, ignoring the fact that it is the only country in history to have gone to war with itself to end slavery; and for its supposed imperialism throughout the world, rather than its key role in defeating the USSR and saving the world from totalitarian communism, and its role in maintaining peace and stability throughout the world before the current weakling Obama came to power.

Meanwhile, Israel is vilified more and more.  The cynical policy of Hamas, which uses the “Palestinian” people as human shields while it constantly bombards Israel with rocket-fire, is working – more and more countries are siding with the “Palestinians” against Israel; the dictator controlled UNHRC passes resolution after resolution condemning it; and the narrative grows on social media and in the “progressive” press that Israel is an illegitimate country, a fascist, apartheid regime which is committing genocide against the “Palestinians,” rather than the sole Middle Eastern democracy surrounded by enemies dedicated to its complete destruction.

This is vital, and tragic, because if a majority of people believe that our political and economic system is evil, that the US is evil, that Israel/ the Jews are evil, then the taboo against the evil of Hitler and national socialism will be undermined. If Hitler was racist because he killed all the Jews, but the Jews are themselves an evil race, what sets Hitler and national socialism apart from any other murderous regime?  Especially as the living memory of WW2 dies, and its cause and its effects are reinterpreted and revised, Hitler will just become another Napolean.

Thus, Socialists, to hide their own, massive crimes of the 20th century, have tried to project their own evils onto the people and values which served to protect us the most from fascism. In doing so, they have opened the door for fascism to return.