Students are such delicate petals these days. I fondly recall the tutorial in my University heyday in which a fellow male student used the term ‘carnivorous vagina’ twice in a discussion on Nietzsche with special reference to the music of Pink Floyd. Today, it would be re-education camp, or worse, for that ignoramus! As reported in the Spectator recently, even classical literature, is now too edgy for today’s oh so easily offended and traumatised learners. Marvel at the following (true) examples from a campus near you – and we don’t mean campus as in a psychiatric ward. According to the Spectator, to be banned, if not burned in a campus bonfire, as disturbing and offensive are:

“The Great Gatsby (because it’s misogynist), Huckleberry Finn (racist) and The Merchant of V 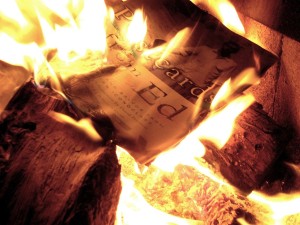 enice (anti-Semitic). This spring at Columbia University, a student complained she had been ‘triggered’ by Ovid’s Metamorphoses. Proserpina’s treatment at the hands of Dis gave her flashbacks to a past assault, she said, and made her feel ‘unsafe’”

One wonders how someone so delicate as to have panic attacks when reading Ovid is going to get on in the routines of everyday life, not to mention those who cannot cope with the trauma of being assaulted by the misogynist violence of F. Scott Fitzgerald’s prose (which seemingly packs more of a punch to today’s easily offended students than his alcohol induced left hook ever did in a Paris bar); or how someone so fragile as to find Shakespeare intolerably anti-Semitic, of Hick Finn racist, is ever going to be able join in a round the barbecue discussion on life and politics and society without having to be restrained and medicated.

Clearly The Lion the Witch and the Wardrobe must be banned too, as an overt and misogynist attack on women in parliament; One Flew Over the Cuckoo’s Nest blatantly discriminates against the mentally ill, as does Hamlet for that matter, both to feature in a campus book burning near you; whilst A Passage to India violates the human rights of the inhabitants of that country, with blatantly infantilising colonial era oppression, all in words! I could go on, but will not.

If today’s students can’t read a book without taking offence, it’s no wonder they are so attracted to a totalitarian Socialism that seeks to ban, silence, and shut down any non-conforming voice, allegedly in protection of someone’s rights, even if that someone is a lone offence taker with their fragile feelings hurt. It’s the inherent selfishness of political correctness, not its inherent stupidity, that is the most insidious threat to what remains of the Enlightenment in the West. 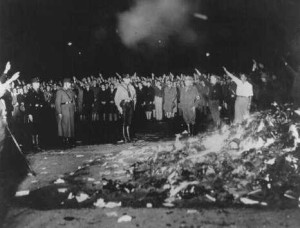 The author of this gem of a piece from the Spectator (link below) ends with this instructive anecdote, that gives one much to think about, not least as to

whether we have hastened the decline of Christianity in the West to our great peril, both as individuals and as community.

“In my twenties, just as full of self-pity and terror as this new generation, I once dropped in to see a priest, Father Fudge, and poured out my woes, imagining he would be both sym

pathetic and impressed by my torment. Fr Fudge listened quietly, then said: ‘The point of being a Christian is not to feel better, it is so God can use you to serve others.’ Others? They hadn’t occurred to me for a while. I said goodbye to Fr Fudge, feeling not triggered or marginalised but unaccountably lighter. It wasn’t all about me! I actually laughed with the relief of it.”

Brilliant. And spot on. It’s not all about you, offence taking student sookie la-la’s. Build a bridge and get over it!

Source: The contagious madness of the new PC