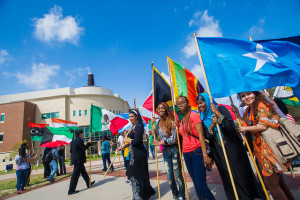 In an unprecedented move, migrant community leaders in Europe and Australia have overnight issued strong statements relating to the recent trend for violent protests, especially with regard to the Israel-Palestine conflict and so-called Islamic State.

“After watching videos of the recent violent protests, we were struck by the similarity of our youths behavior on the streets of Europe and the Middle East. It became apparent to us that we have made a grave error somewhere along the line. To be clear, many of us have fled our home country as asylum seekers, and we now realise that we have been inadvertently recreating the conditions which we fled from.

For this reason, we have developed the following code of conduct, which forms our social contract with our host countries, and operates in conjunction with existing laws and customs:

1) While we maintain our religious faith, we acknowledge that we must not practice it in a way that contradicts the laws and ethos of our host countries. So, to my daughters, rest easy, no FGM for you. And the weddings are off, at least until you finish high school.

2) We are initiating our own gratitude day. It is our way of saying thank you to the host society and community for the overwhelming, and sometimes ridiculous, level of tolerance and acceptance. To be honest, we think it’s gone too far in our favor, and because no one else will say, we will say it: We need to re-balance, for your own benefit!

3) Most importantly, we acknowledge the painful fact that the cause of most conflict which has displaced us from our traditional home is religious diversity and the associated conflict of competing belief systems. For this reason, we are making a concerted effort to stop defining ourselves by our religious creeds, so that we may stop conflict along these lines of definition”

After this announcement a free BBQ was put on by the community leaders, which was free for all to attend, as a sign of goodwill. One local resident in London summarised the mood perfectly “This is the most relieved I have felt in a long time, and the most unified our community has been in living memory. It has also been a great opportunity to tear down the barriers and interact as people, as opposed to be segregated as people of different faiths.”