The last time in modern history that women were collectively held accountable for their own behavior was the end of the Second World War in Europe. European women from occupied nations who had openly fraternized with the Germans were paraded through the streets in disgrace, their heads shaved and their clothes torn. Afterwards they were ostracized and the bastard children from their liaisons with the enemy treated with pity and contempt.

That women were so comprehensively held accountable for their actions speaks volumes to the chaos and lack of control at the end of the conflict, and much less so to male patriarchy. But it is important to remember that some of the most enthusiastic promoters of punishment for these women were their fellow female citizens. Have a look at any number of historical photos of these gals being driven through the streets in disgrace to see the harsh reality. 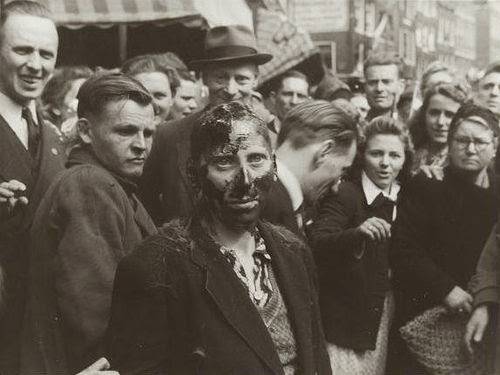 The woman in the photo has been shorn and tarred. The crowd eager to witness her public humiliation is equally made up of men and women. Muh patriarchy.

Roissy recently wrote about the predilection of women to sleep with their conquerors.

“I noticed many commenters at that Daily Mail article excusing the Frenchwomen’s treachery. “They did what they had to do to survive.” This is wrong-headed. Sure, women use their sex to gain favors or even, when times are bad, to survive, but all you have to do is look at the faces of those French girls and see the sheer genuine delight animating them. They probably never felt more alive, or hornier.”

It’s all a game until the Allies storm Normandy, your German boyfriend gets a bullet to the face, and suddenly you’re not getting the best seat in the town cafe any more.

But it seems that such an outpouring of real life consequences, no matter how long ago, is simply inexcusable for the current prevailing feminist paradigm. Something must be done; we simply can’t have such a stain on women being allowed to perpetuate into the bowels of history.

“Young Norwegian girls and women who had relations with German soldiers or were suspected of having them, were victims of undignified treatment,” Ms Solberg said at an event to mark the 70th anniversary of the UN’s Universal Declaration of Human Rights on Wednesday.

“Our conclusion is that Norwegian authorities violated the rule fundamental principle that no citizen can be punished without trial or sentenced without law.”

“For many, this was just a teenage love, for some, the love of their lives with an enemy soldier or an innocent flirt that left its mark for the rest of their lives.

“Today, in the name of the government, I want to offer my apologies.”

Norway’s prime minister is female, for what it’s worth, though you wouldn’t know it by looking at her photo.

It’s very interesting that she should mention the fact that these women were punished without trial or sentenced without law. I wait with bated breath for the soon to be released announcement condemning the execution of Norwegian men and boys for collaborating with the enemy, or for any fighting men who refused to fight and who were executed out of hand. I mean, none of them got this trial and law stuff either, right? I suppose that means that they missed out on these new fandangled ‘human rights’.

Fat chance of that happening.

Tim Newman thinks that what happened to these women wasn’t right at all:

“Leaving aside the fact that teenage girls and women in their early twenties can hardly be expected to be immune from falling in love with whoever struts around town in the best uniforms, how was anyone to know the Germans were not going to be there forever? For much of the occupation it must have seemed that way to a lot of people; for how long were young women expected to wait for liberation?”

Yeah, I mean that’s what those telemark skiers who sabotaged the Nazi heavy water plant should have done as well; why were they risking their young lives to stop Hitler getting his hands on an atomic bomb? They had no idea when liberation was.

“Lt. Joachim Ronneberg, the 23-year-old resistance fighter in command, and his eight comrades — all carrying cyanide capsules to swallow if captured — had been told by British intelligence only that the plant was distilling something called heavy water, and that it was vital to Hitler’s war effort.”

Ronneberg and his compatriots were of course doing their part to save their nation. The women having babies with the enemy? Not so much.

Men have a duty to fight and resist, as do women. The government has a duty to adequately prepare for such an eventuality as well. Many of the European nations that surrendered to Germany are held up as examples of a failure of their menfolk; the men didn’t fight. But the truth in the vast majority of these conflicts is that the men did indeed fight but it was a failure of their governments to prepare for a fight that caused their surrender.

(The Netherlands were giving the Germans a right thrashing until the Nazis figured out that dropping lots of bombs on the unprotected Dutch cities would solve the problem. Rotterdam, which had no air defenses to speak of, was flattened. The Germans issued an ultimatum that Utrecht would be next and the Dutch government surrendered. If only they’d purchased a few antiaircraft guns. This was a total failure of the Dutch government, not the Dutch fighting man.)

But once again, women’s failures are passed off as being acceptable because ‘the men didn’t fight’.

Tim is wrong in his assessment. Not only must women be held accountable for their actions, but it is precisely this lack of accountability that has landed our societies in the present out of control female predicament in which we find ourselves. Turning back to one of the very few modern times where women have been held responsible and actively shamed and punished, and demanding that this be reversed is simply playing into the hands of the feminazi prog harpies.