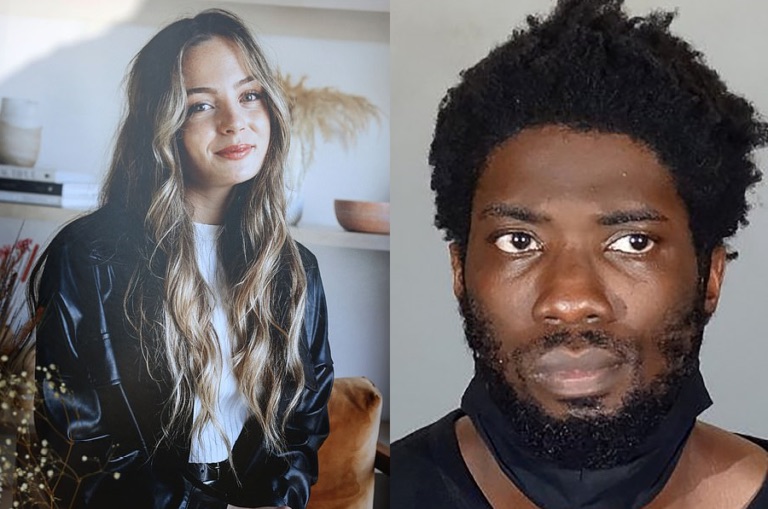 Q: How do you know a murder is “random”?

A: When the victim is white, the killer is black, and you’re wearing the blue!

On January 13th, 2022, a 24-year-old white woman named Brianna Kupfer was working by herself at the Croft House Furniture store in Los Angeles.

A 31-year-old black man named Shawn Laval Smith, who did not know the victim, entered the store and attacked Kupfer without provocation.

The rage and hatred felt for the person Smith never met was put into full perspective in a recently leaked autopsy, which shows he stabbed the girl 26 times.

The killing was instantly declared “random” by LAPD investigators. This conclusion is being used by the office of Jewish funded “woke” prosecutor George Gascon to suspend criminal proceedings in order to grant Smith a psychiatric evaluation, which potentially gives the  savage a Get Out Of Jail card.

While committing this crime, Smith had the mental clarity to wear sunglasses and a hoodie in order to obscure his identity. The criminal justice system had no problem accepting his mental competency when charging and convicting him for his long and storied past of violent offenses.

Let’s close our eyes and imagine a different scenario. If Smith had attacked a Hasidic Jew, a transgender, or Asian on the street, would the LAPD claim the attack was “random”? What if Smith walked up to a police officer and stabbed them 26 times? We won’t even do the old if the roles were reversed bit, we are far beyond that.

Are we really supposed to think there is no cause and effect when every gear in American life turns to accuse all whites of orchestrating a hidden mass murder against the black population, such as what we saw following the death of George Floyd in the summer of 2020, and these increasingly common “random” South African-style black on white homicides?

Nobody really believes this, we simply are not allowed to express common sense because our rulers have declared it unauthorized!

The true racism is against whites, and it is institutional. Under this system, a person of European descent, regardless of who they are or what station they occupy in American life, can only be a guilty perpetrator and never a victim in an interracial conflict.

This is a consensus opinion manufactured with no scientific merit in our Jew-run Ivy League schools and subsequently upheld, through money and politics, by a conspiracy of malfeasance involving our corrupt cops, prosecutors, media and judges.

These are not the ravings of a frothing at the mouth bigot, but a reality the world is beginning to acknowledge. After the racially motivated, I mean “random,” murder of brilliant Italian student Davide Giri in New York, European media was on fire with speculation on why white victims of racial violence are not provided justice in America.

Most noteworthy was the reaction from Federico Rampini, an Italian journalist known for his hard-left opinions and membership in the communist party. Rampini expressed indignation at the painstaking efforts by the New York Times to cover up Giri’s death and the circumstances motivating his killer. “Why do New York Times readers know nothing about Pinkney [Giri’s black killer], aside from his name and age? If the victim was black and the attacker a white man, especially if he was a member of a right-wing organization, the tragedy would’ve wound up as frontpage news.”

America’s racial power dynamics are a homegrown shade of crazy that baffle even the most anti-racist figures in other countries.

Back to Smith, we know that district attorney Gascon had done everything in his power as a prosecutor to keep a man charged with opening gunfire on an occupied vehicle out of jail and on the street so he could butcher Kupfer. NowGascon believes the man he fought to keep free was criminally insane?

A legitimate criminal justice system, one that upholds victim’s rights and provides retribution, would charge Gascon as an accessory to the many murders committed by beneficiaries of his outrageous policies and televise his trial.

We must change this system and restore sanity to our nation, so that those in power who enable racial murders out of racial spite are brought to real justice.