For those folk living under a rock (or who listen to the Liberal media for their information) Hillary Clinton is not well at all. While establishment propagandists would have you believe this latest fainting collapse was brought on by “pneumonia”, the truth appears to be a little more complex than what Democrats would have you believe.

A friend of mine specialising in clinical neuroscience and neurological research (who like myself has epilepsy) provided me a casual prognosis about Hillary’s condition. My friend noted auras that distorted spatial awareness (where the need to touch something in order to ground oneself occurs), the jerking back of the head quickly, gaps in memory, and brief partial falls, as clear evidence of Hillary’s reoccurring seizure activity.

There has also been credible prognosis that suggests Hillary Clinton has Parkinson’s disease, after it was revealed by WikiLeaks that Hillary’s executive staff in the State Department were conducting research into the Parkinson’s medication Provigil.

Some sources have suggested that Hillary is having to survive day to day on a regime of uppers and downers that is not dissimilar to Dr. Theodor Morell’s “pick-me-up” solution for the avid political animal.

As it appears Hillary is as crook as her crooked career, one must ask the following: if we can rebuild her, and if we have the technology, would we be willing to cough up the cash? 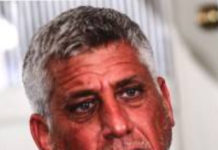